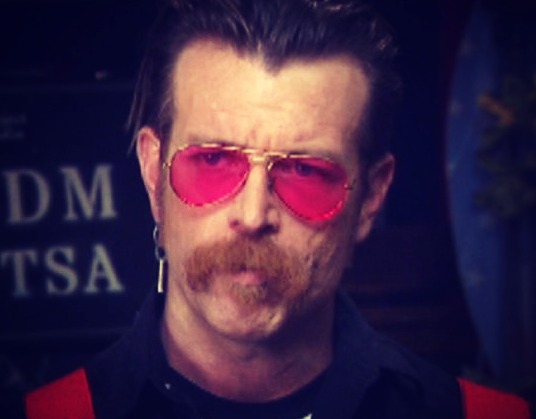 Although he actually said this months ago, the U.S. media is just now choosing to report on it. Pretty telling in itself, huh?

Frontman of Eagles of Death Metal Jessie Hughes, the band playing in the Bataclan when gunmen reportedly opened fire on everyone, believes the shooting was an “inside job”. Hughes has alleged that the security guards were in on it.

The band would’ve been a handful of a select few people inside the building before anyone else that night, so you would think such a claim would be taken seriously by authorities and investigated as such. According to the “new” reports however, officials at the Bataclan have “angrily rejected” the singer’s claim as “senseless” and have stated that he’s just saying that because he was “traumatized”.

Now listen to this:

Hughes, the singer and guitarist of Eagles of Death Metal, said he immediately felt uneasy when setting up for the November 13 show as a guard in charge of the backstage area at the Bataclan club did not make eye contact.

“I didn’t like him at all. And so I immediately went to the promoter and said, ‘Who’s that guy? I want to put another dude on,’” Hughes said in an interview broadcast late Wednesday with Fox Business.

“He goes, ‘Well, some of the other guards aren’t here yet.’ And eventually I found out that six or so wouldn’t show up at all,” Hughes said. “Out of respect for the police still investigating, I won’t make a definite statement, but I’ll say it seems rather obvious that they had a reason not to show up.”

These are the kind of statements that, in the real world, would be thoroughly investigated. If this was, say, an episode of CSI or one of those crime shows, this would have happened in the first ten minutes and then the plot for the rest of the show would be finding out who did it based on this kind of eyewitness account. Even the Scooby Doo gang would have looked into such claims.

In the crazy land of false flags we live in however, such claims are labeled “absurd” and dismissed for reasons that don’t hold any water.

In fact, because Hughes dared to speak out against the official story to suggest that somehow the whole thing could have been a set up, the media tried to paint him as a pro-2nd Amendment right-winger, demonizing him with labels the way they always do when someone says something the establishment doesn’t want people to hear:

Hughes, in contrast to many rockers, was known even before the attacks for his right-leaning views and support for the right to own guns in the United States.

In the interview with Fox Business, Hughes said he was not necessarily advocating gun ownership but wished that fans had ways to defend themselves.

Oh not. Not that. Not people having the right to defend themselves!!

As if Hughes’ “right-leaning views” or his support for the 2nd Amendment have anything at all to do with the fact that he saw something suspicious that night which should be investigated and which authorities are apparently trying to sweep under the rug.