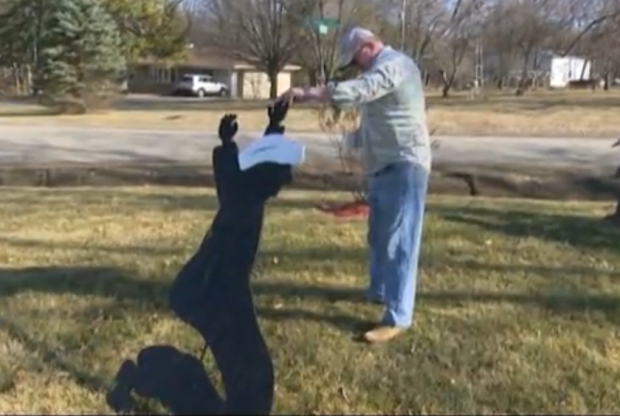 They have imported this barbaric legal code to the West, and our political, academic and media elites have submitted.

When we held an art exhibit with depictions of Muhammad and were targeted for death, the media blamed us. When the editorial staff at Charlie Hebdo were assassinated for blasphemy, they were blamed as well. It’s not just these obvious examples, it’s in the daily social fabric of our lives. We are banned on Facebook (I am currently blocked for 30 days on Facebook). It’s in our schools — while an Islamic curriculum is widely taught, my colleagues and I are blacklisted from speaking at colleges and schools.

Under the guise of “hate speech” (who decides what is hate?), Islamic supremacists are destroying our freedoms and imposing their oppressive mores on us all.

“Free speech should not be mixed with hate speech,” argued Imam Kamil Mufti from the Islamic Foundation of Peoria. “It’s extremely important and we have to draw that line.”

And why should Muslims be upset with a scene depicting the kill or capture of a terrorist?

“Lawn Display Of Hunter Infuriates Muslims When They Notice What He’s Aiming At,” Defund.com, March 11, 2016:

Illinois man Dennis Murdy created quite the controversy in his neighborhood when he recently erected two silhouette cutouts on his lawn that depicted a turban-wearing jihadi terrorist surrendering to an armed hunter.

According to WKTV, when Muslims in Murdy’s community found out about his lawn display, they threw quite a fit.

“Free speech should not be mixed with hate speech,” argued Imam Kamil Mufti from the Islamic Foundation of Peoria. “It’s extremely important and we have to draw that line.”

Mufti added that most Muslims do not wear a Turban. It is in fact Sikhs who typically wear this piece of garment. (Which kind of makes you wonder what he’s upset about, then.)

In explaining why he put up the display in the first place, Murdy pointed to his concerns about Islam.

“The Muslims and Islam is one of the most violent cults there is,” he opined. “It is not a religion. It’s a cult. Their Quran says nothing but violence.”

“You can see what (the Islamic State group) is doing,” he continued. “They are spreading across the country and this is biblical.”

Murdy did acknowledge the existence of peaceful Muslims, though he pinned some of the blame for radical Islamic terrorism on them, arguing that they should do more to stop it.

“That was intended to show my feelings on what’s happening to our country and other parts of the country,” he concluded.

Apparently, he really dislikes terrorists, and that seems like a very fair stance to maintain, especially given how many innocent people they kill.

I understand why some Muslims might feel a bit concerned about Murdy’s display, but at the end of the day, so long as they refrain from engaging in terror activities as the vast majority of Muslims do, they should have absolutely no concern, as Springfield resident Mike Mohn pointed out.

“I don’t think it spreads a dangerous message,” he said. “It’s just a terrorist.”