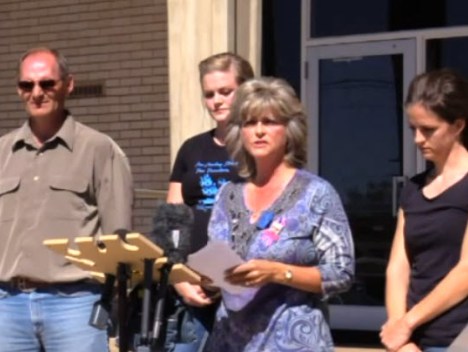 LaVoy Finicum’s widow, Jeanette Finicum, announced this week that she would be pursuing a wrongful death lawsuit against officials in Oregon. Her husband was murdered on January 26, 2016 in an ambush orchestrated by the Oregon State Police and the FBI. The Oregon State Police are attributed with the fatal shots.

“My family and I reject the biased, whitewash findings and conclusion reported yesterday,” Mrs. Finicum told media at a press conference at the Washington County Building in St. George on Wednesday.

According to the autopsy report of LaVoy Finicum, which was conducted by Clifford C. Nelson, MD, Finicum was shot multiple times in the back. And we know from the video that was taken from Shawna Cox’s cell phone that more shots were fired than just those that struck Finicum. In fact, FBI agents are under investigation for at least two rounds they fired.

Yet, both the FBI and the Oregon State Police claim that the shooting was justified, even though no lives were in danger but Finicum’s and those in his vehicle.

Yet, Mrs. Finicum claims that she and her attorneys have evidence that the roadblock was a setup, or as eyewitness Victoria Sharp said, “an ambush.”

“I believe, my family believes, my lawyers believe that this evidence will ‘shock the conscience,” she said.

Mrs. Finicum also claims that the video produced by the Department of Justice was selectively edited and that the uncut version shows her husband with his hands up and walking away from his vehicle, which it does.

She also said that investigators left her husband in the snow for upwards of ten minutes without any type of medical attention because they knew they had killed him.

US Attorney for the District of Utah seems most concerned over a potential coverup in the FBI.

“The greater concern though is, why would an individual lie about firing their weapon? And then did others know and are they covering for him?” Tolman asked.

I agree, why was there a coverup not only by the FBI agent that fired his weapon, but apparently four others were covering for him. Not only those agents, but it appears that Greg Bretzing, special agent in charge of the FBI in Portland said, “The question of who fired these shots has not been resolved.” Does that not also sound like a coverup? How can you know that two rounds were fired by one of your agents but not know who that agent is?

Something is rotten in Denmark for sure surrounding this entire thing and Mrs. Finicum and her attorneys not only have evidence of wrongdoing, but it appears that over 600 emails and text message that surround and involve Oregon Governor Kate Brown, as well as everything that took place from December 29, 2015 till the standoff ended might need some explaining as well.

On Thursday, the Central Oregon Major Incident Team released 360 pages of documents, including the autopsy and interviews with the Oregon State Police officers concerning the traffic stop.

More documents will be released, according to the Deschutes County Sheriff’s Office, which released the Shawna Cox cell phone