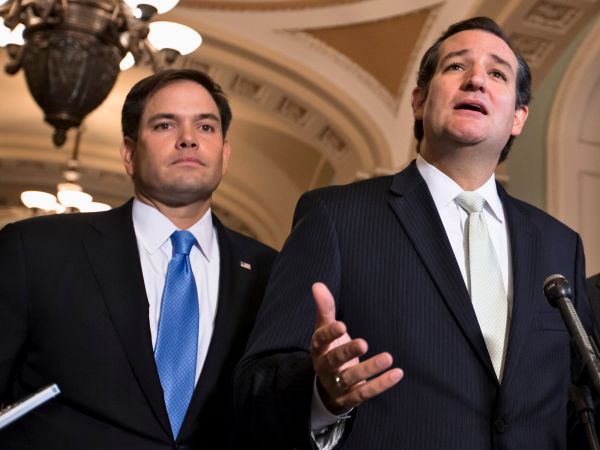 And for blaming Donald Trump’s freedom of speech for the violence at Trump rallies by far left wing insurgents.

Jerry Shalow: Cruz you lost my vote for using this protest for your political game. Rubio also. Trump has my vote. How about the violations of the 1st amendment, TED!!!!!!! Condone the violence what you just did.

Pappy Beagles: I’m a Texan, I voted for you for the senate, and was supporting you for president, up until you blamed Trump for the savage behavior of Hillary and Bernie supporters in Chicago. I just sent a $100.00 contribution to a billionaire, and i’m retired on a fixed income, so guess this is goodbye to you, and I am now firmly on the Trump wagon.

Gayle Natale: Mr. Cruz, I just listened to your response regarding the protestors who caused Mr. Trump to cancel his rally in Chicago. You did not mention the violation of the first amendment once during your speech. I am extremely dissapointed in you. You pride yourself daily on upholding the constitution in your speeches. All you did was put the blame on Donald Trump even though Mr. Trump never made an appearance. It is obvious to everyone that this was a carefully planned protest. And I would not be surprised if you were behind it, as part of your plan to sabotage Donald Trump. You are one of the dirtiest polititians I have ever known!

Jace Conners: Ted Cruz… i was an undecided voter who was leaning your way then you blamed trump for the actions of violent protesters. I am now voting Trump thanks for helping me make my choice tonight.

Mike John Monseur: Dear Mr. Cruz. I have been watching you in this campaign and was leaning toward supporting you. Tonight, the disgrace in Chicago took place when protesters put thousands of people in harms way. As I was watching Fox and other News, many people came on the air. Mr. Trump did and called for peace. Ben Carson also called for peace and Marco Rubio came on the air. He talked about the hired professionals creating this disruption and he also called for peace and unity. Then I watched you step in front of the camera’s and I thought you would have a strong uniting message to bring order in Chicago. Like a leader should. Like a President should in times of trouble. Then all you talked about was yourself and your campaign and used this tragic evening to better yourself. I’m so disappointed in you Mr. Cruze. You lost my vote.

Roy Stiles: Ted Cruz, I’ve been a true conservative for 40 years. I supported you here in Texas and voted for you for Senate. And while I believe Trump is the leader this country needs, I’ve been saying I’d continue to support you for the Senate, even after the shenanigans in Iowa, but after you comments tonight in response to what happened at the Trump rally in Chicago I can assure you that I will not only not support you again for Senate in Texas, but I will actively campaign against you. Our country simply cannot afford divisive selfish people like you in positions of power.

Abigail Mccamick: At least Rubio had the integrity to admit and say that many of the protesters were paid to be there and cause chaos. Ted takes advantage to use such an ugly tragedy to campaign. Undecided here but Cruz just pushed me farther away with his actions over the protest.

Dave Schiff: Cruz, how dare you try to blame Donald Trump for what happened in Chicago tonight. Trump’s first amendment rights were crushed along with the freedom to assemble of thousands of people going to the speech. You say you are a constitutional conservative defending the rights of individuals. You are a fraud and no better than Obama. How dare you. I would not ever vote for a fraud like you.