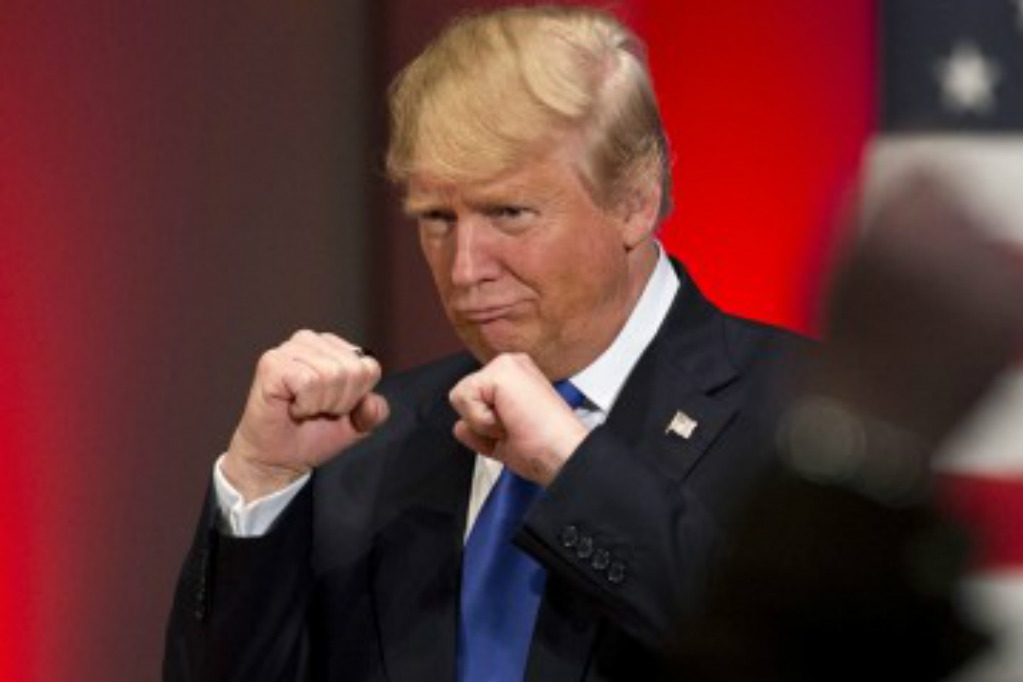 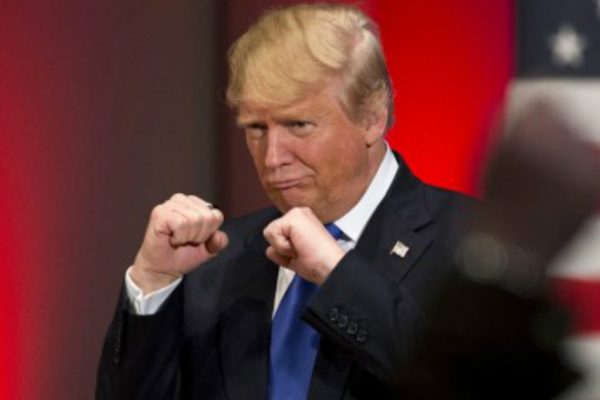 If nothing else is blatantly obvious in America, Donald Trump taking the nation by storm and causing an uproar is. The people’s fierce support of Trump is ruffling the feathers of “Black Lives Matter” protestors and other anti-Trump groups to the point these groups are crashing Trump rallies around the nation. Protestors engage in violence, assault, name-calling and racial slurs toward Trump supporters to the point the media is blaming Trump for inciting violence when these protestors are failing to exhibit personal responsibility and control. Naturally, the media fails to inform the public that George Soros funded MoveOn.org and Bernie Sanders promoted the anti-Trump protest groups. One can bet Hillary Clinton is in there as well.

But, it isn’t only Democrats, communists, socialists and Marxists who have a hard time dealing with the political powerhouse Trump is steadily moving toward. The GOP establishment cannot understand the powerful reaction and acceptance Trump has garnered among American citizens. Because citizens have rejected the Republican Party picked “golden boys,” GOP establishment figures met at a luncheon in Washington, DC, to discuss measures that could be used to defeat Trump, despite his popularity among voters.

The luncheon was filmed as part of an episode titled “The Reckoning” in the Showtime documentary series The Circus, which chronicles the 2016 race for the White House. Executive producers Mark Halperin and Mark McKinnon sat down with these establishment figures before Super Tuesday.

The conversation is reproduced for your convenience.

RICK HOHLT [Major GOP Fundraiser]: Everybody around this table that I know, we’ve been in every Presidential campaign probably since 1980, in various degrees. And in Trump’s problem, he doesn’t have a compass. You don’t know what his compass is.

MARK McKINNON [GOP Strategist and Executive Producer of The Circus]: And how problematic is that for the future of the party?

HOHLT: I think before it’s all over, it’s gonna be hugely problematic.

VIN WEBER [Former Congressman]: I talk to people all of the time, as I’m sure everybody around the table does, and they say, “Why don’t you Republicans do something about this guy?” I’m sorry. This is not the Soviet Union. We can’t call a meeting and decide Trump is out.

RON KAUFMAN [White House Advisor Bush 41]: And we hate that.

While the participants laughed at Kaufman’s statement, sometimes there is truth in humor. Americans have witnessed firsthand how both parties push candidates onto the public. Unfortunately, the Republican Party has handed its voter base losers for the last two presidential elections – losers, in the sense that McCain rubs elbows with ISIS terrorists and Romney had no spine to hold up the “jelly.” If the Republican Party cared about their voter base instead of upholding the “establishment status quo,” the party would support candidates who have their finger on the pulse of conservative constitutionalists.

KAUFMAN: Deny dictatorship — Who’s for it? Trump is doing well for one reason. He understands the climate and the culture of America today better than anybody at this table.

MARK HALPERIN [Political Journalist and Executive Producer of The Circus]: How do you feel about the fact that the Republican nominee may be someone that none of you know?

ED ROGERS [White House Advisor Reagan, Bush 41]: Shell-shocked. Bewildered. Republicans are hierarchical, respectful of authority, and we fall in line, and Trump has interrupted that cycle.

WEBER: Donald Trump, nobody thought of him as any kind of political leader until six months ago.

ROGERS: He’s not articulate. He’s not poised. He’s not informed. All he has going for him is a lot of votes. Why hasn’t any of that hit home? Here we are. Here we are.

As Kaufman stated, none of these individuals at the meeting understands the climate and culture of America today. Ed Rodgers gave the reason for that – Republicans are hierarchical, respectful of authority, and fall in line. In other words, these “establishment figures, which have been in every Presidential campaign since the 1980s,” have difficulty getting out of the “hierarchical, falling in line, respectful of authority” box to wander amongst the people to find out what is important to voting America.

Weber came close to admitting Trump was overlooked as having any type of chance to garner citizen support. As Rogers put it, they view Trump as “not articulate,” poised or informed. Funny, many American voters said the same thing about Romney, yet the Republican Party ran him against Obama. Still, it seems this group of “political intellectuals” cannot figure out why Trump has a lot of votes.

These individuals are not as smart as they think they are if they cannot figure out that the American voter base is tired of Republican Party members ditching their spine for a rubber band that “snaps to” every time Obama unconstitutionally usurps power or caves to give him what he wants when he wants it regardless of the effect it has on the nation. Republican candidates lied to the voter base to achieve a majority in the Senate in the 2012 mid-terms. Nothing has been done about any scandal plaguing this administration nor has anything been done about the traitor in the White House or Hillary Clinton’s criminal activities. Inaction, a lackadaisical attitude, and a plain “we don’t give a darn” sentiment among elected Republicans have left a bad taste in the mouths’ of Americans for the establishment status quo.

ED GOEAS [Pollster, Anti-Trump Super PAC, McCain Campaign]: I think everyone’s kind buying into this, he’s inevitable, and that he can’t be stopped. I believe he can be stopped.

HALPERIN: What are you doing or plan to do to stop him?

HALPERIN: What are you doing?

GOEAS: We’re working on it. We were effective in Iowa, and that was enough to knock him into second.

McKINNON: None of us know who you’re talking about.

HALPERIN: What’s your role in that PAC?

GOEAS: Polling which is non-public record.

HALPERIN: But which concerns you more — that he’d lose the general if he were the nominee or how he’d do as President?

MIKE DUNCAN [Former GOP National Chairman]: Losing the election. What we’re facing is a choice between Hillary and Trump.

GOEAS: So what you’re saying is a vote for the least of two evils.

Well Mr. Ed Goeas, both parties have been handing evils to the public to choose between for years but you are just now figuring that out? Incredible. And to be honest, Clinton is a criminal, which as far as anyone knows, Trump is not. Clearly, the evil would be Hillary.

HALPERIN: Do you know for sure Trump would be a better President than Hillary Clinton?

DUNCAN: No, but it’s a risk that I’m willing to take. If we get off into splitting our party, we can’t put it back together. Humpty Dumpty won’t come back together.

WEBER: That’s the great dividing line, that question right there.

HALPERIN: ‘Cause you care more about him being President.

WEBER: I’m scared of him as President. I think he’s an authoritarian figure. To deport 12 million people, build a wall on the Mexican border, and impose a religious test on people coming into this country is so violative of everything I believe about America and the Republican Party.

ROGERS: I travel around the world a lot, and Trump is a laughingstock. The world, whatever that is, is at peace with Hillary Clinton.

KAUFMAN: The next President’s gonna decide the direction of the Supreme Court for four years at minimum. Do you really want to give it to her? Mrs. Warren will be beating the crap out of her to make sure it’s some lefty pinko. So you know that’s a fact.

HOHLT: I mean, what does that mean? But you’re right.

KAUFMAN: In the end, that’s the question.

This is what “establishment” figures discussed. It is quite telling. Kaufman fails to realize the president nominates justices and the Senate confirms or denies. Republicans do not have to cave to a president. In doing so, it removes one of the checks and balances to executive power. No one could be more of a laughingstock than Hussein Soetoro. Just because “the world is at peace” with the criminal Hillary Clinton, it does not mean Americans have to be at peace with the election of a criminal. However, one of these clowns seems to have no problem throwing the election to Hitlery.

And so goes the “intellectual” think tank behind closed doors to plot a scheme to undermine Trump, quell the voice of the American public, and choose “their man” while trying to keep the “hierarchical, respectful of authority, fall in line” status quo of the Republican Party. They fail to realize that if the American public wanted the “status quo,” Trump would have never gained widespread support.