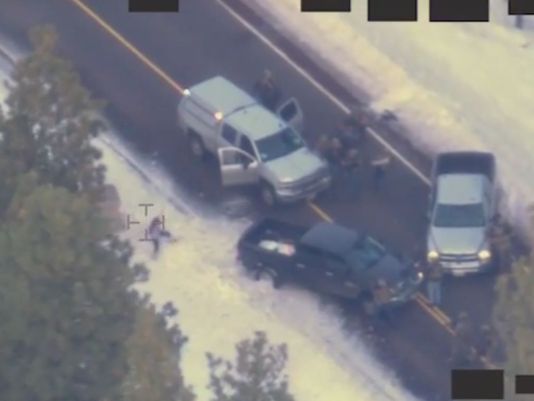 Bend, OR — Last week, a torrent of new information on the Lavoy Finicum shooting, including a photo of where he was shot and video from the inside of his vehicle during the road block, were released to the public. It was also announced that the FBI is being investigated for a cover up after the shooting.

Since the shooting, which was captured on video from the FBI’s birdseye view, there have been many theories surrounding the death of Finicum.

According to the official story, Lavoy Finicum was killed by officers because they had no other choice as he was reaching for a gun in his left pocket. Officials claim they later found a loaded 9 mm semi-automatic handgun in that pocket.

It is evident from the video that Finicum never presented the handgun. However, we can clearly see him reaching for his left side.

In a photo of the autopsy report, taken by RT’s Simone Del Rosario at the press conference last Tuesday, and the newly released video, there is a now an alternative reason, outside of going for a gun, as to why Finicum was reaching toward his left side — he was shot there.

The newly released video shows that officers and agents opened fire on the vehicle prior to Finicum exiting it.

The footage from inside the vehicle shows that Finicum could have been shot with his hands up as he was exiting the vehicle.

After announcing that the state troopers committed no wrongdoing, it was announced that multiple FBI agents are under investigation who were on the scene that day.

Authorities revealed that at least one FBI agent is suspected of lying about firing twice at Robert “LaVoy” Finicium, and may have gotten help from four other FBI agents in covering it up afterward.

Immediately after admitting that the agents were under investigation, officials quickly noted that none of the shots fired by the unnamed agent, who is part of an elite national strike unit, hit Finicum. However, newly released police reports show that two bullet casings which could have proved that an FBI agent shot Finicum — disappeared from the scene.

According to the Oregonian, the police reports show that investigators, who saw the full FBI video the day after the shooting, suspected something was amiss. They searched two FBI pickups used at the roadblock, looking for bullet casings, according to a detective’s report. They didn’t find any.

However, FBI aerial surveillance video shows that before the detectives could get there, the FBI agents searched the area with flashlights and then huddled, according to law enforcement sources who have seen the video. The group then broke and one agent appeared to bend over twice and pick up something near where the two shots likely were taken, the sources told The Oregonian/OregonLive.

As members of an elite FBI strike unit, the odds of missing two shots from such close range are slim. Could it be that Finicum was shot, knew these people weren’t afraid to kill all the occupants of the truck, and, therefore, heroically drew fire away from the vehicle by yelling “shoot me,” and saved the lives of all those inside? All the evidence shows that could be the case.

As for which FBI agent fired those shots — they still don’t know. Greg Bretzing, special agent in charge of the Portland FBI office, cautioned at a news conference last week, “The question of who fired these shots has not been resolved.”