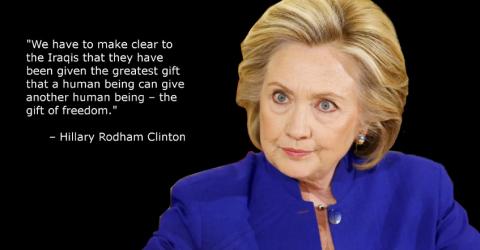 In the process of explaining her vote in favor of the war in Iraq, Hillary Clinton made a startling admission — she sided with then-President George W. Bush because he promised billions of dollars to help New York after 9/11.

In an interview with MSNBC’s Chris Matthews, Clinton described the situation the day after the attack as if she, alone, could be the savior of New York City. Matthews queried the presidential candidate, who now admits the U.S. invasion of Iraq was a mistake, why Sen. Bernie Sanders foresaw the folly of that war when she could not.

After a fly-over, seeing the “devastation” at ground zero, Clinton stated $20 billion had been immediately slated by the Bush administration to rebuild the Pentagon and fund Homeland Security, but “not a penny for New York.”

Clinton attended a small meeting at the White House, where she intimated she faced Republican opposition in garnering financial help to rebuild NYC.

“I’m sitting there in the Oval Office, and Bush says to me, ‘What do you need?’ And I said, ‘I need $20 billion to rebuild, you know, New York.’ He said, ‘You got it.’ And he was good to his word,” Clinton explained to Matthews. “So, my experience with [Bush] on something of great import to this country was positive — because, literally that same day, I get back to the Capitol, and the Republicans are trying to take that money away. We kept calling the White House. Bush kept saying, ‘I gave them my word, I’m going to stick with it.’ So, you know, I had a different set of experiences [than Sanders].”

Besides apparently explaining her affirmative vote for the use of force in Iraq as an exchange for earmarking funds for NYC, Clinton also justified her vote with a long-disproven theory.

During the feverish build-up toward war in 2003, Bush and his cronies often claimed Saddam Hussein had been stockpiling chemical, biological, and potentially nuclear weapons — “weapons of mass destruction,” or WMDs. Though the U.N. conducted inspections which proved largely fruitless in that respect, when speaking with Matthews, Clinton revisited and agreed with that contentious Bush administration claim.

She claimed that, at the time, there was a “strong sense” Saddam had restarted his nuclear and biological weapons programs; and, thus, a discussion about the need for “regime change” in Iraq. “That was the prevailing opinion,” Clinton said.

As Matthews quickly noted, evidence, even available at the time, didn’t back up that theory. In fact, former CIA director, Mike Morrell, had specifically briefed Bush that there were no indications Saddam had those capabilities or had begun to manufacture such weapons. Matthews, who previously interviewed Morrell on the subject, asked Clinton whose information she considered in her vote to invade Iraq since the CIA had nixed the WMD theory.

Clinton referred to the ongoing U.N. inspections, which — though Saddam had been less than cooperative — had not discovered evidence of WMDs, either.

“Here’s what was misleading,” Clinton explained, “is that Saddam Hussein could have ended it immediately. He could have said, come anywhere, look anywhere, we have nothing. But he didn’t choose to do that.”

As Matthews continuously grilled Clinton over the events from 2003, it became clear she was as absent an explanation for her vote to invade Iraq as Bush had been. Intelligence did not bear out any weapons programs in the country. Rather, fervor for the invasion either blinded the government or left the administration and its pro-war supporters scrambling to come up with excuses to make it happen.

Though Hillary Clinton admits her vote to invade Iraq was “a mistake,” her admission rings hollow in light of the evidence she uses for justification. As usual, her excuse-filled interview seems wholly disingenuous. Hundreds of thousands of innocent people died because she wanted money.