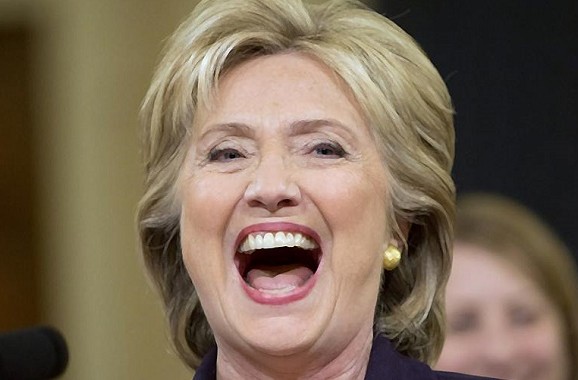 Do you ever wonder how it is possible that millions of Americans could support Hillary Clinton?

Going back the last three decades you’d be hard-pressed to find any actual success stories or accomplishments – even Hillary can’t name her own accomplishments! In fact, if you actually cared about America like many Hillary supporters claim they do, you’d be aghast at the corruption, violence and sheer arrogance surrounding the person who may become the President of the United States.

While Trump certainly has his faults, we remain bewildered that someone who gives the term “human being” such a bad name is even in the running to become the leader of the free world.

It turns out that we’re not the only ones who think another Clinton Presidency would be a disaster.

Economist and trend forecaster Marc Faber, in his traditional hilarious yet brilliant style, makes it clear that not only will Hillary be bad for America, she will destroy the entire world in the process:

It’s all relative… Given the alternatives I’d vote for Mr. Trump… because he may only drestroy the U.S. economy, but Hillary Clinton will destroy the whole world… that’s the difference.

Look at her nation building in the middle east… how successful that has been.

While some of his suggestions, such as his recommendations to protect your property with high voltage fencing or to buy a machine gun and a tank for personal defense, often elicit laughter from mainstream media pundits, he’s dead serious about the potential for widespread global destruction.

In 2012 Faber warned that World War III would start within five years.

With a potential Hillary Presidency on the horizon and the disastrous result of America’s foreign policy under her leadership (and we use this term loosely) as Secretary of State, coupled with her overwhelming desire to go down in the history books for having accomplished something – anything – of historical significance, one can’t help but consider that so long as she’s remembered for centuries to come she would be more than willing to push the red button.

You know, because what difference does it make?