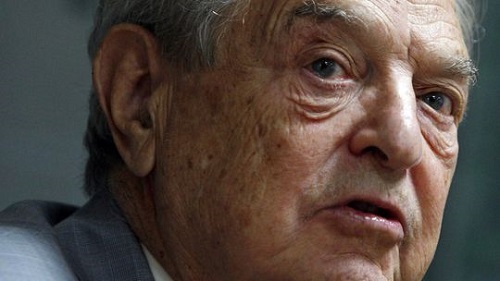 Our seemingly total disenfranchisement came at the same time electronic voting did. We’ve seen accusations of election rigging with this new technology on every level in society since, from local elections all the way to federal ones.

Now it’s come out that Lord Mark Malloch-Brown, chairman of UK-headquartered electronic voting firm Smartmatic Group, also sits on George Soros’ Open Society Foundation board and is part of his investment firm. The Lord also used to be number two at the UN and a World Bank VP.

And Smartmatic will be running Tuesday’s Republican caucuses in Utah.

Makes you feel really good about the vote count, doesn’t it?

The Wall Street Journal dubbed the Republican party’s online adventure on Tuesday as “one of the biggest online votes conducted so far in the U.S.” and the “largest experiment with online presidential voting since 2004, when Michigan allowed Democrats to vote in a party caucus via the Internet.”…

The Journal did not cite the biography of Malloch-Brown, chairman of Smartmatic’s board. That biography is posted openly on Smartmatic’s website, and shows close associations between Malloch-Brown and Soros, a major donor to the Democratic Party and hundreds of liberal and radical-left groups.

Mark Malloch-Brown is a former number two in the United Nations as well as having served in the British Cabinet and Foreign Office. He now sits in the House of Lords and is active both in business and in the non-profit world. He also remains deeply involved in international affairs.

Mark served as Deputy Secretary-General and Chief of Staff of the UN under Kofi Annan. For six years before that he was Administrator of the UNDP, leading the UN’s development efforts around the world. He was later Minister of State in the Foreign Office, covering Africa and Asia, and was a member of Gordon Brown’s cabinet.

Other positions have included vice-chairman of George Soros’s Investment Funds, as well as his Open Society Institute, a Vice-President at the World Bank and the lead international partner at Sawyer Miller, a political consulting firm. He also has served as Vice-Chairman of the World Economic Forum. He began his career as a journalist at The Economist.

Electronics can be hacked. Plain and simple. But the citizens of Utah are probably at the very least under the impression that their votes are being counted by a company headquartered in the USA. Nope.

Even worse, however, look at the politics of the people ultimately running the machines that tally the “vote”. These people should be trusted with a task of this magnitude why again? For those citizens out there who still believe that the American democratic process is somehow magically not rigged, how much faith do you honestly have in a guy like this running the equipment that tallies your vote?

The deception has become so obvious. The odds of a fair election continue to be less and less in the people’s favor, a fact that is basically being rubbed in everyone’s faces at this point. And we all know how much the Establishment has made it clear they do not want Donald Trump, regardless of the will of the fed up populace.

Elite Insider: ‘Trump Will Not Be President… Hillary Will Win’