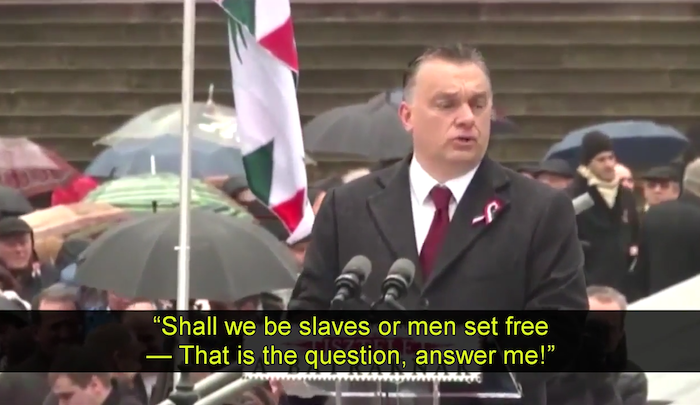 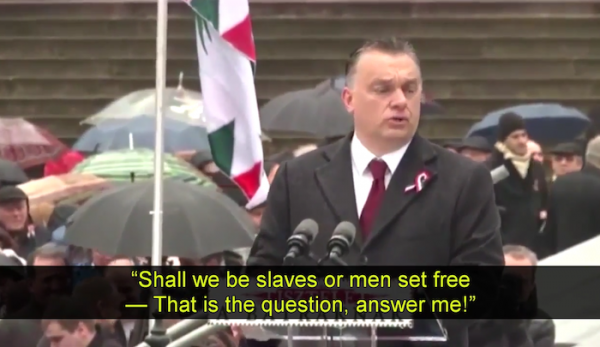 Victor Orban is a beacon of light shining out from a rapidly darkening continent.

Here is the complete translation of Victor Orban’s speech (via The Rebel):

The destiny of the Hungarians has become intertwined with that of Europe’s nations and has grown to be so much a part of the union that today not a single people — including the Hungarian people — can be free if Europe is not free.

And today Europe is as fragile, weak and sickly as “a flower being eaten away by a hidden worm.” Today, 168 years after the great Wars of Independence of the European peoples, Europe, our common home is not free!

Ladies and Gentlemen, Europe is not free. Because freedom begins with speaking the truth.

Today in Europe it is forbidden to speak the truth.

Even if it is made of silk, a muzzle is a muzzle.

It is forbidden to say that those arriving are not refugees, but that Europe is threatened by migration.

It is forbidden to say that tens of millions are ready to set out in our direction.

It is forbidden to say that immigration brings crime and terror to our countries.

It is forbidden to point out that the masses arriving from other civilizations endanger our way of life, our culture, our customs and our Christian traditions.

It is forbidden to point out that those who arrived earlier have already built up their own new, separate world for themselves, with its own laws and ideals, which is forcing apart the thousand-year-old structure of Europe.

It is forbidden to point out that this is not an accidental and unintentional chain of consequences, but a preplanned and orchestrated operation; a mass of people directed towards us.

It is forbidden to say that in Brussels they are concocting schemes to transport foreigners here as quickly as possible and to settle them here among us.

It is forbidden to point out that the purpose of settling people here is to reshape the religious and cultural landscape of Europe, and to reengineer its ethnic foundations — thereby eliminating the last barrier to internationalism: the nation-states.

It is forbidden to say that Brussels is now stealthily devouring more and more slices of our national sovereignty, and that in Brussels many are now making a plan for a United States of Europe — for which no one has ever given authorisation.

Ladies and Gentlemen,Today’s enemies of freedom are cut from a different cloth than the royal and imperial rulers of old, or those who ran the Soviet system; they use a different set of tools to force us into submission.

Today they do not imprison us, they do not transport us to concentration camps, and they do not send in tanks to occupy countries loyal to freedom.

Today the international media’s artillery bombardments, denunciations, threats and blackmail are enough — or rather, have been enough so far.

The peoples of Europe are slowly awakening, they are regrouping, and will soon regain ground.

Europe’s beams that rest on the suppression of truth are creaking and cracking.

The peoples of Europe may have finally understood that their future is at stake:

Now not only are their prosperity, cosy lives, jobs at stake, but our very security and the peaceful order of our lives are menaced as well.

At last, the peoples of Europe, who have been slumbering in abundance and prosperity, have understood that the principles of life that Europe has been built on are in mortal danger.

Europe is the community of Christian, free, and independent nations; equality of men and women; fair competition and solidarity; pride and humility; justice and mercy.

This time the danger is not attacking us the way wars and natural disasters do, suddenly pulling the rug from under our feet.

Mass migration is a slow stream of water persistently eroding the shores.

It is masquerading as a humanitarian cause, but its true nature is the occupation of territory.

Flocks of obsessed human rights defenders feel the overwhelming urge to reprimand us and to make allegations against us.

Allegedly we are hostile xenophobes, but the truth is that the history of our nation is also one of inclusion. and the history of intertwining of cultures.

Those who have sought to come here as new family members, as allies, or as displaced persons fearing for their lives have been let in to make a new home for themselves.

At first, they talk about only a few hundred, a thousand or two thousand relocated people.

But not a single responsible European leader would dare to swear under oath that this couple of thousand will not eventually increase to tens or hundreds of thousands.

If we want to halt this mass migration, first we must curb Brussels.

The main danger to Europe’s future does not come from those who want to come here, but from Brussels’ fanatical internationalism.

We should not allow Brussels to place itself above the law.

We shall not allow it to force upon us the bitter fruit of its cosmopolitan immigration policy.

We shall not import to Hungary crime, terrorism, homophobia and synagogue-burning anti-Semitism.

No immigrant riots here, and there shall be no gangs hunting down our women and daughters.

We shall not allow others to tell us whom we can let into our home and country, whom we will live alongside, and with whom we will share our country.

We know how these things go. First we allow them to tell us whom we must take in, then they force us to serve foreigners in our own country.

In the end we find ourselves being told to pack up and leave our own land.

Therefore we reject the forced resettlement scheme, and we shall tolerate neither blackmail, nor threats.

The time has come to prevent the destruction of Europe, and to save the future of Europe.

The leaders and citizens of Europe must no longer live in two separate worlds. We must restore the unity of Europe. We the peoples of Europe cannot be free individually if we are not free together.

If we unite our forces, we shall succeed; if we pull in different directions, we shall fail.

Together we are strength, disunited we are weakness. Either together, or not at all — today this is the law.

Hungarians, In 1848 it was written in the book of fate that nothing could be done against the Habsburg Empire. If we had then resigned ourselves to that outcome, our fate would have been sealed, and the German sea would have swallowed up the Hungarians.

In 1956 it was written in the book of fate that we were to remain an occupied and sovietised country, until patriotism was extinguished in the very last Hungarian.

If then we had resigned ourselves to that outcome, our fate would have been sealed, and the Soviet sea would have swallowed up the Hungarians.

Today it is written in the book of fate that hidden, faceless world powers will eliminate everything that is unique, autonomous, age-old and national.

They will blend cultures, religions and populations, until our many-faceted and proud Europe will finally become bloodless and docile.

And if we resign ourselves to this outcome, our fate will be sealed, and we will be swallowed up in the enormous belly of the United States of Europe.

The task which awaits the Hungarian people, the nations of Central Europe and the other European nations which have not yet lost all common sense is to defeat, rewrite and transform the fate intended for us.

We Hungarians and Poles know how to do this. We have been taught that one can only look danger in the face if one is brave enough.

We must therefore drag the ancient virtue of courage out from under the silt of oblivion.

First of all we must put steel in our spines, and we must answer clearly, with a voice loud enough to be heard far and wide, the foremost, the single most important question determining our fate:

The question upon which the future of Europe stands or falls is this:

“Shall we be slaves or men set free — That is the question, answer me!”