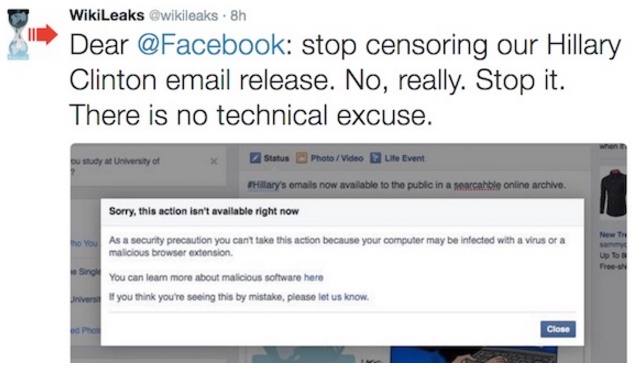 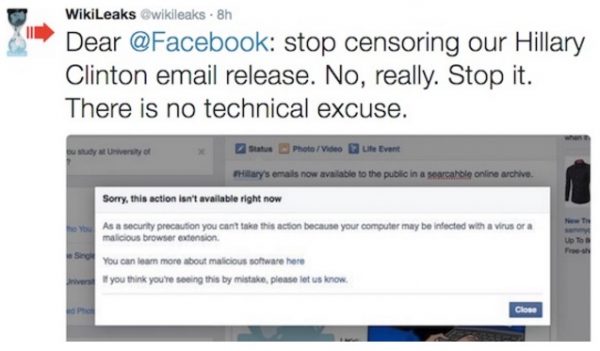 United Kingdom — On Wednesday, a major archive containing over 30,000 of Hillary Clinton’s emails was released. Though the State Department began releasing the emails in May last year — after a Freedom of Information Act request — it is the first time the messages have been made easily available in a searchable format, courtesy of WikiLeaks. Before the launch, the FBI was investigating the Democratic candidate’s use of a private server during her tenure as Secretary of State. The archive contains over 7,000 emails written by Clinton herself.

The scary, albeit fascinating exposé on who’s in bed with whom in the halls of global power has expanded to include Facebook, according to WikiLeaks. The organization has accused the social networking site of censorship, saying Facebook is blocking users’ access to the latest Clinton dispatch.

As a result of the outing, Twitter users are calling Clinton wicked, a thug, and a hypocrite. The released emails uncovered that the presidential frontrunner was instrumental in spreading chaos and extremism in Libya. They also revealed that she pushed for oil privatization in Mexico and forwarded emails claiming a Sunni-Shiite war would be good for Israel and the West.

For those who are fascinated but don’t have the time or inclination to sift through more than 30,000 documents, here is a snapshot of what Clinton’s emails revealed:

brought down a country that didn't need ur money or help, country that was debt free ur wicked Hilary! https://t.co/5RwsNFN0K0