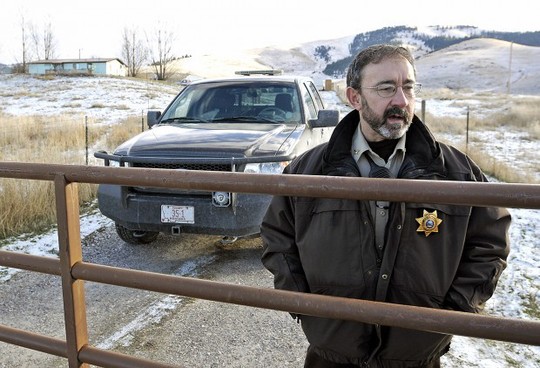 As reported on 21 March, 2016, a judge unsealed the name of the final defendant who is being indicted on federal charges surrounding the Malheur Refuge occupation in January of this year. The person named is Montana resident, and someone I know and consider a friend, Jake Ryan. I met Jake when we traveled in the same vehicle down to Nevada during the Cliven Bundy incident; and got to know him much better while spending 10 days working with Jake and others to provide a video documentary of those historical events in April of 2014.

The Facade of Invincibility

As recent events have illustrated, the tyranny which the federal government has unlawfully perpetrated upon American Nationals (who we really are) is being exposed at an exponential rate. The fact that there have been numerous organized protests against the unlawful federal occupation of states out West is a testament to the mass awakening occurring across America. And now with Montana Constitutional Sheriff, Tom Rummel standing up to the Feds, the risk to the Feds is now much greater than ever that the proverbial “cat will be let out of the bag,” and that their whole facade of invincibility will be exposed.

Another Call to Action?

I spoke to one of my contacts yesterday and they informed me that there are some “heavyweight” militia-types headed for Sanders County, Montana as I write this article. Their words, not mine. Apparently, they are aware that Jake Ryan and his family have proclaimed that Jake will not be arrested, and are planning to stand their ground against any attempt to do so. As I alluded to earlier, the only thing keeping Jake Ryan from a visit to his waiting jail-cell is the fact that Constitutional Sheriff, Tom Rummel has provided cover. I also spoke briefly to Senator Jennifer Fielder who is the sitting State Senator for the Sanders County area. Senator Fielder is calling for calm because the Feds are following lawful orders from Sheriff Rummel; although the pressure on him is tremendous, or so I am told.

I have included the latest press release from Sheriff Rummel’s office below:

SANDERS COUNTY SHERIFF’S OFFICE PRESS RELEASE, MONDAY, MARCH 21ST, 2016.THIS POST IS TO UPDATE YOU ON THE ARREST WARRANT ISSUED FOR JAKE RYAN. LAST WEEK, I WAS NOTIFIED BY THE FBI THAT AN ARREST WARRANT HAD BEEN ISSUED FOR JAKE RYAN, FOR HIS INVOLVEMENT AT THE MALHEUR WILDLIFE REFUGE IN OREGON. SINCE THAT TIME I HAVE BEEN IN CONTACT WITH THE RYAN FAMILY AND THE FBI IN ORDER TO WORK OUT A PEACEFUL RESOLUTION TO THIS SITUATION. AT THIS TIME THE RYAN FAMILY HAS SOUGHT THE COUNSEL OF AN ATTORNEY WHO IS WORKING WITH THE FBI ON THE CHARGE OR CHARGES AGAINST JAKE. FROM THE START OF THIS, IT HAS BEEN MY INTENTION TO MAKE SURE THAT JAKE RYAN’S SAFETY AND RIGHTS ARE PROVIDED FOR, AND I WILL CONTINUE TO DO JUST THAT. WITH THAT SAID, I WANT YOU TO KNOW THAT FEDERAL OFFICERS HAVE NOT OPERATED IN THIS COUNTY WITHOUT MY KNOWLEDGE. AT THIS POINT IN TIME, I HAVE NO EVIDENCE TO SUGGEST THAT JAKE RYAN IS IN THIS COUNTY. AT THIS TIME, I BELIEVE A PEACEFUL RESOLUTION IS BEING ACHIEVED AND OUTSIDE CITIZEN INVOLVEMENT WILL NOT BE NEEDED. AS OF THIS AFTERNOON (03-21-16) I HAVE RECEIVED OVER 400 E-MAILS AND 100 PHONE MESSAGES, PLEASE DO NOT E-MAIL OR CALL AS I CANNOT KEEP UP. THANK YOU FOR YOUR SUPPORT AND UNDERSTANDING IN THIS MATTER.

The Jig is Up

You can attribute it to the increase in the availability of information, you can attribute it to Donald Trump, or you can attribute it to something else entirely; nonetheless, the fact remains clear that Americans are finally catching on to the idea that the entire federal structure is a fraudulent mafia beholden to special interests and the banking cartel. And, in my opinion, the “jig is up.” Certain bells have been rung that cannot be un-rung, doors have been opened that cannot be closed, and, more importantly, truths have come to light that will no longer reside in darkness. Yes, we are truly living in dangerous and exciting times. I do not know what is going to ultimately happen in Sanders County over the next few days, but since it’s a 90-minute drive from me, I will do my best to catalogue the events on video. Stay tuned to http://northwestlibertynews, as I will provide updates there as soon as I have them.