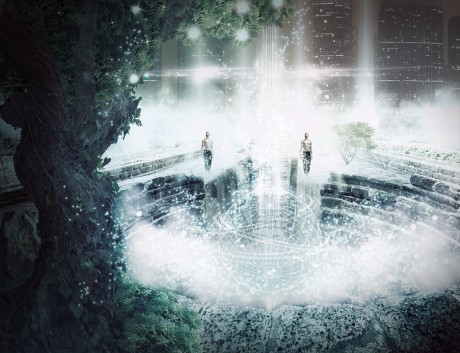 In April, part of the Temple of Baal that stood in Palmyra, Syria will be reconstructed in Times Square in New York City and in Trafalgar Square in London.  The specific portion that is being erected in both cases is the 48-foot-tall arch that stood at the entrance to the temple.  The Institute of Digital Archaeology is the organization behind this effort, and the display of these two arches is intended to be the highlight of UNESCO’s World Heritage Week late next month.  After seeing my initial story, one of my readers observed that an arch is really just a gateway or a portal.  In other words, it can serve as both an entrance and an exit.  So could it be possible that we will be unknowingly setting up a gate or a portal of some sort in Times Square?

The worship of Baal, also known as Bel, can be traced all the way back to ancient Babylon.  According to the Encyclopedia Britannica, Marduk was “the chief god of the city of Babylon”, and ultimately he became known as “Bel” or “Lord”…

Marduk, in Mesopotamian religion, the chief god of the city of Babylon and the national god of Babylonia; as such, he was eventually called simply Bel, or Lord. Originally, he seems to have been a god of thunderstorms. A poem, known asEnuma elish and dating from the reign of Nebuchadrezzar I(1124–03 bce), relates Marduk’s rise to such preeminence that he was the god of 50 names, each one that of a deity or of a divine attribute. After conquering the monster of primeval chaos,Tiamat, he became Lord of the Gods of Heaven and Earth. All nature, including man, owed its existence to him; the destiny of kingdoms and subjects was in his hands.

And it is interesting to note that according to Wikipedia, the name of the city of Babylon is believed to have originally come from an Akkadian word that meant “Gate of God” or “Gateway of the God”…

The English Babylon comes from Greek Babylṓn (Βαβυλών), a transliteration of the Akkadian Babili.[5] The Babylonian name in the early 2nd millennium BC had been Babilli or Babilla, which appears to be an adaption of an unknown original non-Semitic placename.[6] By the 1st millennium BC, it had changed to Babiliunder the influence of the folk etymology which traced it tobāb-ili (“Gate of God” or “Gateway of the God“).[7]

So now we are setting up a “gateway” or a “portal” for the chief God of ancient Babylon in the heart of our most important city next month.

Does anyone else out there find this more than just a little bit creepy?

It just seems so surreal that an arch from the Temple of Baal that is nearly five stories high is going to be erected in Times Square in April.  But this is actually happening.  The following comes from the New York Times…

NEXT month, the Temple of Baal will come to Times Square. Reproductions of the 50-foot arch that formed the temple’s entrance are to be installed in New York and in London, a tribute to the 2,000-year-old structure that the Islamic State destroyed last year in the Syrian town of Palmyra. The group’s rampage through Palmyra, a city that reached its peak in the second and third century A.D., enraged the world, spurring scholars and conservationists into action.

This sounds like the plot for some really twisted episode of “Stargate” and not something that is supposed to happen in the real world.

And as I reported yesterday, the Institute of Digital Archaeology hopes to put hundreds more of these arches in major cities all over the planet.

What in the world are they thinking?

If we want to take all of this to another level of creepiness, let’s recall what I talked about the other day.  Baal evolved from the chief god of the city of ancient Babylon known as Marduk, and Marduk can be traced back to an actual historical person.  This historical person was known in Sumerian literature as “King Enmerkar”, and in the Bible he was known as “Nimrod”.  Here is a portion of a quote from Peter Goodgame that I included in an article the other day…

Traditionally the Tower of Babel event has been associated with Nimrod, and Jewish commentaries as well as the Jewish historian Josephus both seem very emphatic on this point. Regarding the Sumerian name Enmer-kar, the suffix “kar” means “hunter,”  and so “Enmer-kar” is in fact “Enmer the Hunter,” just as Nimrod is referred to as the “Mighty Hunter” in Genesis 10. Furthermore, Enmerkar is named on the Sumerian King List as “the one who built Uruk,” just as Nimrod is described in Genesis 10:10 as having a kingdom that began in “Babel (Eridu) and Erech (Uruk)… in the land of Shinar.” After Enmerkar’s death he became honored in Sumerian myth as the semi-divine hero Ninurta, and eventually this cult evolved into the great cult of Marduk, which became the state religion of Babylon after the conquests and religious innovations of Hammurabi.

The cult of Marduk was the root of all of the ancient pagan religions of the Middle East, Egypt, Greece and Rome.  In those other religions, the deity of Marduk came to be known by other names such as Baal, Osiris, Apollo, etc.  And today there are many secret societies and occult groups that look forward to the day when this pagan deity will be resurrected and will return to rule the world once again. This is something that I explained in our latest YouTube video…

I know that all of this may sound very strange to you, but many of these secret societies and occult groups take this stuff deadly seriously.  And many Christian scholars are convinced that there is a link between the coming of the Antichrist and this ancient pagan deity based on the actual historical figure of Nimrod.

So could it be possible that we are laying out a couple of giant welcome mats for this ancient pagan deity by erecting these giant arches in New York and London next month?

Could we be opening up gateways and portals that are extremely dangerous and that we simply do not understand?

I don’t know about you, but for me the construction of these giant arches is a very, very bad sign…