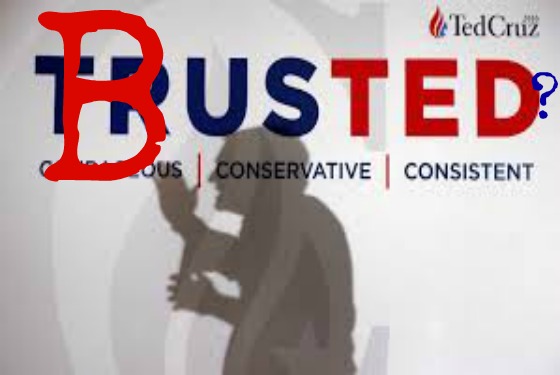 It’s looking more and more like TrusTed is BusTed.

Rumors that Ted Cruz has had affairs with not one but FIVE mistresses (at least) began to circulate last week. Cruz accused Donald Trump of planting the story, which was published by The National Enquirer.

Two days after the story broke, Cruz responded to the accusations of adultery with a bizarre statement, including this gem:

Well let me be clear: Donald Trump may be a rat, but I have no desire to copulate with him.

I’m not sure what that means, and I’m positive that I don’t want to know.

Yesterday, Trump responded to Cruz’s accusations of Trump planting the story accusing Cruz of being a serial adulterer (whew!):

I am saying that Ted Cruz has made this up because he needs it politically because he’s losing so badly. It’s very easy. And he’s doing very badly and he’s choking and he’s making things up. He’s bringing ’em out. I had nothing to do with the National Enquirer story, and frankly, I hope it’s not true. Because it’s pretty bad. I hope it’s not true.

I knew nothing about it, I know nothing about it. I have no idea whether or not it’s true, but it’s likely he should try and blame me because he’s losing by a lot. I mean, I have many, many more delegates than him. I have millions of more votes than him in the primary. He’s losing by a lot, so he’s not going to blame Rubio, ’cause Rubio’s out … I just want to tell you, I had nothing to do with that story. Absolutely zero.

One can’t help but wonder, though, if Cruz will accuse Trump of being involved in this too:

So, is Cruz a philanderer or not? Right now, nothing has been proven, but things aren’t looking good for Felito.

Roger Stone – a Donald Trump supporter and the only named source in the National Enquirer’s article about Ted Cruz’s alleged mistresses – was interviewed by Frank Morano on AM 970 yesterday, and he had some intriguing things to say:

Phil Houston and Don Tennant, experts in detecting deception, offered their professional opinions on Cruz’s response to the allegations.

They said his response was “strikingly weak in terms of denial, and strong in terms of attack. And that combination is a telltale sign of deception that leads us to conclude that this is a matter that warrants further investigation.”

Houston and Tennant went on to explain:

Behaviorally, when the facts are the ally of an individual, he or she almost always tends to focus on the facts of the matter at hand. In this case, if the key fact was that he had not had these affairs, Cruz would almost certainly have been much more strongly focused on the denial. That is, he very likely would have made a point of explicitly stating something along the lines of, “I did not have these affairs.”

Yet at no point in either statement did Cruz say that. He implied it by saying the allegations are false, and that they’re lies, but behaviorally, such statements are not equivalent to saying he never had the affairs. Even if we were to overlook that fact and consider his statements to be a denial, there is an overwhelmingly higher proportion of attack behavior compared to the effort expended at denial. This type of lopsided attack-to-denial ratio is very consistent with what we have historically seen with deceptive people when allegations are levied against them.

Anonymous threatened to release information on Cruz with prostitutes if he did not leave the race, reports The Gateway Pundit:

​Have you heard of the expression “candy wrappers”? Do you recall visiting prostitutes? Mr. Cruz, we are now demanding you exit this race immediately or Anonymous will release all of the information that we have found. Your so-called underground acts that you think were done in the dark, will be brought out for all the public to see. It will be sent to every media outlet to publicize your disgusting behavior. We assure you it will go viral on every social media platforms in a matter of minutes.