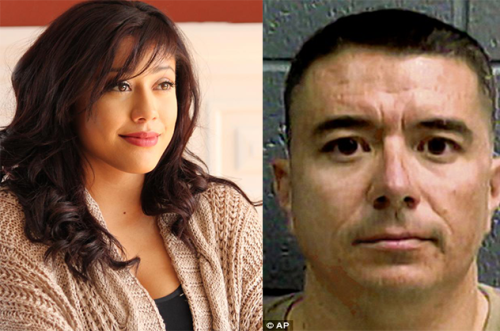 Las Cruces, NM — In 2011, Diana Guerrero, 17 at the time, was an aspiring young woman with hopes of becoming a police officer. Guerrero became a member of the Las Cruces police department’s high school intern program to pursue her dreams of law enforcement — when that dream turned into a nightmare.

Guerrero, who bravely came public after the incident, just settled a federal lawsuit for $3 million this week after her mentor officer in the high school intern program raped her.

“It had never occurred to me that a person who had earned a badge would do this,” she said.

During a ride along with Las Cruces police detective Michael Garcia, who was ironically “assigned to a unit that focused on child abuse and sex crimes investigations” at the time, the pair headed out to a crime scene. However, instead of going to the crime scene, Garcia took the young girl to a secluded location and forced himself on her.

“The defendant abused his authority as a sex crimes detective in the most horrific way, exploiting the victim’s trust in him to commit his egregious acts,” said Acting Assistant Attorney General Vanita Gupta for the Civil Rights Division, during Garcia’s trial.

In 2014, Garcia pleaded guilty to the assault and was sentenced to 9 years in prison.

For nearly two years after the assault, Guerrero kept quiet out of fear. However, after feeling “like a piece of trash” in 2013, Guerrero says she bumped into a female detective who asked her why she had ended the internship program. “I just blurted it out,” Guerrero told KVIA, describing how she finally built up the courage to expose her attacker.

After Guerrero’s run in with the detective, without Garcia knowing it, his fellow detectives began investigating him and then confronted him with the allegations.  Garcia confessed to the assault on an audio recording. Its contents are stomach turning.

Here are some excerpts from the recording:

KOB News also found out that Garcia’s department knew that he had problems, and yet they still allowed the teen to go out on a call with him.

A few years prior, records show that Detective Garcia had been reprimanded for having sex in his patrol car with a fellow officer’s girlfriend while drinking a bottle of wine.  A used condom and empty wine bottle confirmed his supervisors’ suspicions.

In the confession of the sexual assault on the intern, Garcia is heard saying,

“The badge gets you the pussy and the pussy gets you the badge.  I don’t think we even kissed.  I mean it was straight touching, touching!  It was like three f****** minutes.  Three minutes for the rest of my life.  I’m gonna f****** go away.

Once word in Las Cruces spread of this monster’s actions, an underage family member also came forward and alleged that Garcia had been raping her for years.

Below is the unedited audio from Garcia’s confession: WARNING CONTAINS GRAPHIC LANGUAGE

“I am most happy and satisfied that this lawsuit brought to light a cesspool of sexual violence and harassment that exists in police departments across this country,” Guerrero tells the AP and she’s correct. In only a six-year period, the AP exposed more than 1,000 officers who were fired for a range of sex crimes; it calls that number “unquestionably an undercount.”

According to KVIA, Guerrero now intends to pursue a career in nutrition.