Early Tuesday morning or very late Monday night (in my world) I received a strange and disturbing report that a group of Muslim men opened fire on hikers and campers in a large state park in California. Unable to confirm the source, I waited to post. More info is coming in …..

Of course there has been no reporting from the enemedia on this.

A heavily armed group of men with Middle Eastern appearance was arrested two hours ago outside Los Angeles after opening fire upon hikers and campers in a large State Park in the area. 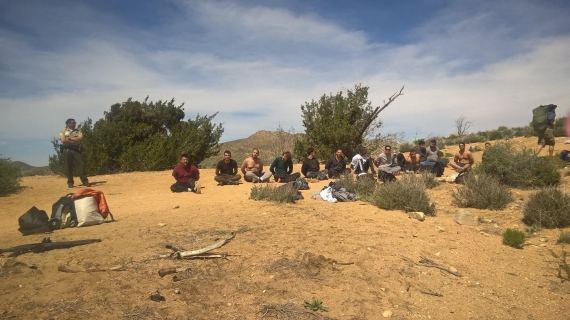 Super Station 95: Photos taken by one of the victims of the attack have been supplied to SuperStation95 as have screen shots of MMS messages sent/received during the incident. They appear below.

No word yet from authorities about the identities or affiliation of the men arrested. The Adelanto, CA Police Department effectuated the arrests.

According to the victim/witness, there were two groups of men, about 15 per group, armed with heavy weapons, who began shouting “Allah u Akbar” and started firing. The firing allegedly lasted upwards of TWO HOURS before police were able to find callers in the vast California parkland.

When police were responding, one group of 15 or so men took-off into the hills, while the other group was captured by police.

According to one of the victim/witnesses, his cellphone GPS map indicates below where the incident took place:

At a camping area near Deep Creek Hot Springs, north of Lake Arrowhead and east of Hisperia.

Photo and police scanner audio at link below.

Per scanner traffic, the reporting party told dispatchers that there were fifteen or more possibly armed men of middle eastern descent that camped out at the location chanting loudly through the night in what was believed to be their native language. Some of the men, believed to be in their 20’s went to a secluded area to shoot at around 3:00 a.m. Witnesses said that the shots fired sounded louder than that of handguns.
The Sheriff’s helicopter was the first on scene and they reported that when the men saw them they grabbed their things and began hiking toward the Bowen Ranch parking lot. The helicopter followed as deputies were en route to the location. The deputies arrived at the Bowen Ranch parking lot and waited for the men to approach.

The men continued to hike for around 20 minutes with backpacks and other bulky items. During the hike, the men reportedly huddled up in possible discussion and at one point split up into two groups.

When deputies approached the men all complied and were patted down. After all were patted down and cuffed, deputies requested an area search since they believed they could have ditched weapons while hiking the trails. Deputies searched for over an hour and did not locate any weapons left behind.

It is unclear if any weapons were located in the possession of the suspects. San Bernardino County Sheriff’s Spokeswoman, Olivia Bozek said, “The deputies detained the subjects and from what I was told they are going to be transported to the High Desert Detention Center. I do not know what charges they are going to be booked for.”

This story is continuing to develop and more information will be updated as it becomes available.