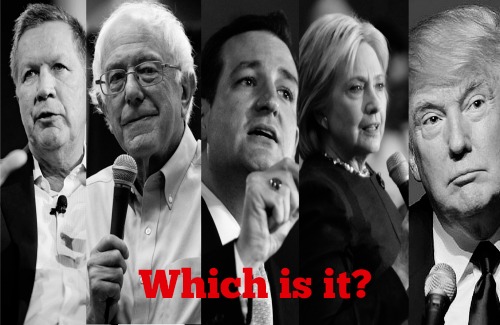 The 2016 presidential race keeps heating up, and we don’t mean in the typical fashion.

Election “seasons” (which now seem to be perpetual) and politicians are no strangers to scandals, and 2016 is no exception.

Last week, rumors that Ted Cruz has had affairs with not one but FIVE mistresses (at least) began to circulate. We were also reminded that an email address associated with Cruz’s senate office was among those exposed in the Ashley Madison adultery hook-up site hack. And, a video that appears to have been released by the hacktivist group Anonymous threatens to release information on Cruz’s supposed interactions with prostitutes if he doesn’t exit the race.

Now, Montgomery Blair Sibley, a lawyer who represented the so-called “D.C. Madam,” says he has phone records that could influence the outcome of the presidential election. He’s threatening to release one or more names on the steps of the U.S. Supreme Court if he’s denied a hearing on his right to distribute them.

Sibley, the late madam Deborah Palfrey’s attorney, has been subject to a restraining order since 2007 barring him from releasing the information, which he says includes 815 names, addresses, and Social Security numbers of Verizon Wireless customers.

Back in February, Sibley filed a motion to allow the release of Palfrey’s escort services’ records, saying they “may contain information relevant to the upcoming presidential election.”

Sibely told WTOP in an email:

I believe the information in my possession from the subpoena returns in the ‘D.C. Madam’ case may be relevant to the upcoming election. As I am presently restrained by Court Order from releasing that information, I feel obligated to seek release from those restraining orders.

In his application for a stay of the restraining order, Sibley wrote:

Time is of the essence. Denying Sibley a hearing deprives the People of the information they may deem material to the exercise of their electoral franchise.

To be clear, if Sibley is not allowed to file his Motion to Modify the Restraining Order and thereafter does not promptly receive a fair and impartial hearing on that Motion, he will justifiably consider the Restraining Order void as a result of being denied such a hearing by the District Court, Circuit Court and now this Court.

Since Sibley first said he had information that may be relevant to the election, several candidates have dropped out of the race. Now, only three Republicans and two Democrats remain, but Sibley won’t say if any are implicated, citing fear of being jailed for contempt.

He also would not say if he was surprised by the National Enquirer report that alleged Cruz had engaged in affairs.

All five of the current candidates likely would have spent time in D.C. when Palfrey’s business was in operation, as reported by U.S. News & World Report:

Cruz was first elected to the Senate in 2012 but represented Texas several times during Supreme Court arguments while Palfrey’s escort business operated.

Most of the other presidential candidates also lived in or visited the nation’s capital while Palfrey’s business operated, including former Secretary of State Hillary Clinton, Sen. Bernie Sanders of Vermont and Ohio Gov. John Kasich – a former congressman. Billionaire GOP front-runner Donald Trump likely visited the region during the decade-long time period.

Perhaps the most intriguing part of Sibley’s filing is this comment:

The delay by this court and resolution of this application in hindsight will intentionally favor one presidential candidate over others by protecting that candidate from the release of the D.C. madam phone records, which the attorney maintains are relevant to this election cycle.

And perhaps the biggest question of all: WHO is the candidate Sibley may expose?