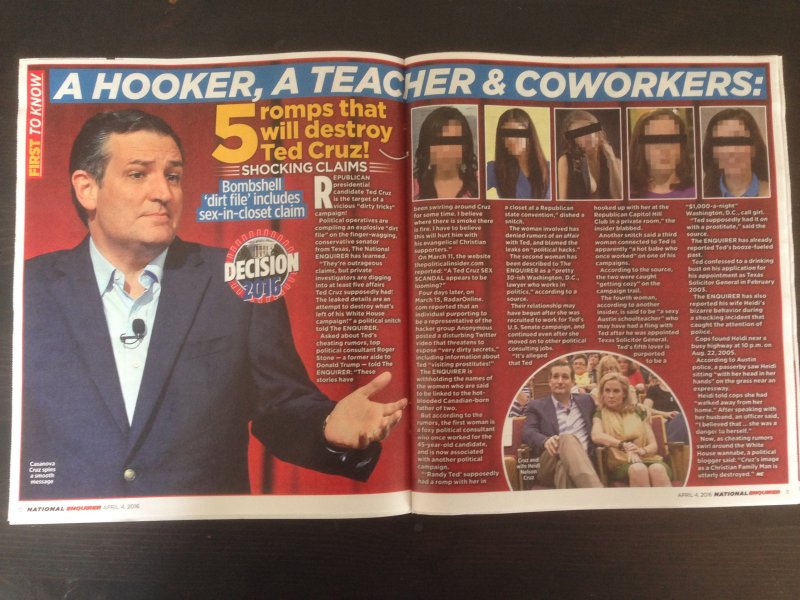 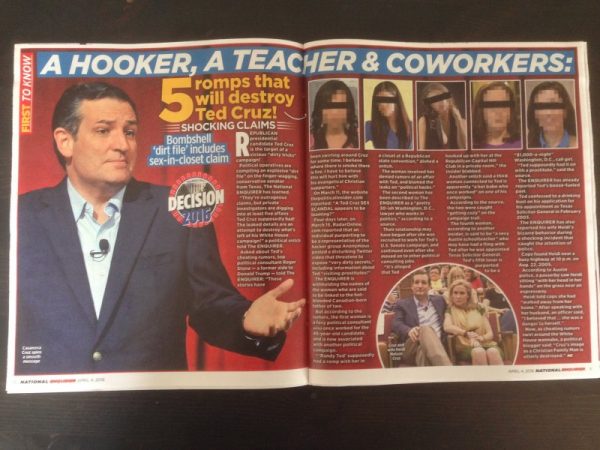 The reporter asks: “‘Senator Cruz, can you please swat down more definitively this National Enquirer piece by telling us on the record that you’ve never been unfaithful to your wife?”

Immediately, although the question was directed at Cruz, Carly Fiorina dutily acts as Cruz’s attack dog by jumping in and blaming the rumors on and attacking Donald Trump.

It is also noteworthy that, as Kelleigh Nelson and Breithart point out, an anti-Trump SuperPAC, Make America Awesome, which put out the “slut-shaming” ads in Utah of a near-naked Melania Trump (when she modeled for GQ magazine), has exactly the same address as Carly Fiorina’s SuperPAC Carly for America, which is re-launched as a nonprofit organization to help elect “conservative candidates”. Both have this as their address: P. O. Box 26141, Alexandria, VA. 22313. Fiorina has formally endorsed Cruz for president.

When Fiorina scolds the reporter that he should “stick to the issues” instead of “dancing to Donald Trump’s tune” by “talking about a scurrilous and ridiculous piece in the National Enquirer,” the reporter, to his credit, persists and asks Cruz to respond with a “yes” or “no” to whether he had been unfaithful because the rumors “raise serious questions about your character.”

Cruz replies: “I recognize that you love going into the gutter . . . stop interrupting. What is your publication?”

The reporter answers: “The Daily Mail.”

Then Fiorina butts in again with a non sequitur, saying, “They’ve chased my granddaughters” — a clear attempt to smear the Daily Mail. [Note: They are her step-granddaughters as Fiorina has no biological offspring of her own.]

Then Cruz says to the reporter: “I’m going to give a very brief answer to your question, which is the National Enquirer story is complete garbage. It is total lies. It was planted by Donald Trump’s henchmen, and I don’t think the people of Wisconsin or the people of America have any interest in tabloid trash. I’m going to focus on the issues that matter to the American people.”

Note that at no time did Cruz, an attorney who is trained in the careful parsing of language, actually answer the reporter’s question, which was whether he had been unfaithful to his wife. All he had to do, if he’s innocent, is to say simply: “Yes, I have been faithful to my wife.”

Why are those 8 words so difficult to say?

Instead, he first had Fiorina deflect the question by going on the offense, attacking Trump. When the reporter persisted, Cruz did the same thing as Fiorina, going on the offense by first attacking the reporter — that the reporter “loves going into the gutter”. Then Cruz attacked the National Enquirer, calling the publication “garbage,” “total lies,” and “tabloid trash” — the same Enquirer that had accurately reported on many stories, including Democratic VP candidate John Edwards’ adultery and extramarital child. Then Cruz attacked Trump, blaming the latter’s “henchmen” for the Enquirer story. Lastly, thinking his supporters to be feeble-minded, Cruz tried to do a Jedi mind trick by claiming that “the people of America” are not interested in “tabloid trash”. In other words, “Move along, nothing to see here.”

If you still think Cruz is a faithful husband, I have the proverbial land in a Florida swamp to sell ya.