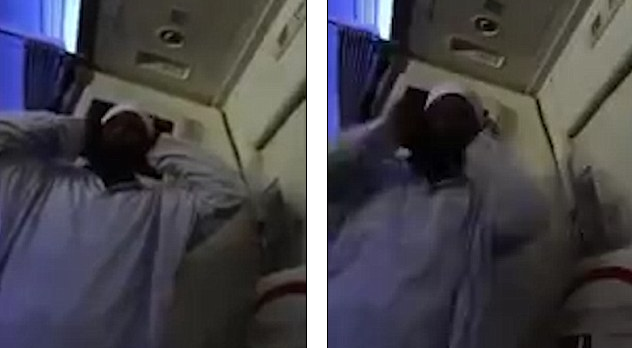 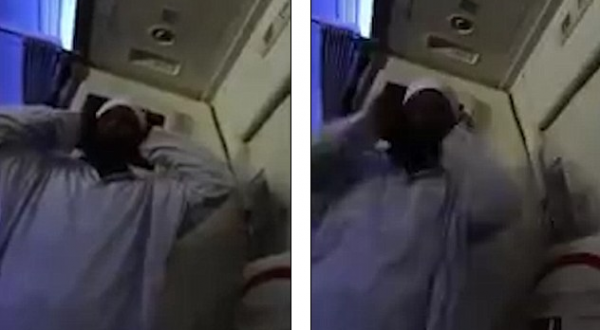 We usually don’t get to see video of these incidents, i.e. the flying imams, etc. What we hear about are terror-tied groups like CAIR filing lawsuits, whining to an eager-to-submit media about islamophobia, because poor, helpless Muslims only wanted to pray.

Watch the video — this devout Muslim knows exactly what he is doing. He is scaring the life out of passengers on board the flight, knowing full well that this is exactly what Muslims who hijack planes and fly them into buildings do and say.

As you watch the video, note how loudly he is praying. The idea of praying quietly out of consideration for his fellow passengers never enters his mind: his prayer is a declaration of supremacism and an assertion of power. Also note that the terror of some of the passengers is perfectly understandable given the contexts in which “Allahu akbar” is most notoriously heard these days. For some reason these passengers don’t associate it with fuzzy bunnies and unicorns. How odd.

“‘I was woken to this guy shouting in my face’: Muslim man yells ‘Allahu Akbar’ repeatedly terrifying Etihad airline passengers as he performs call to prayer,” by Harriet Mallinson, Mailonline, April 1, 2016:

Passengers became terrified after a man began shouting ‘Allahu Akbar’ at the top of his voice on a plane.

Terrified passengers on an American Airlines flight watch as the Muslim man stands next to the exit door yelling in Arabic.

A man on the flight posted the video to Reddit with the caption: ‘Asleep on a plane, I was woken to this guy shouting in my face.’

While on YouTube he wrote: ‘I was asleep at the emergency exit and awoke to this. He had to cover his ears he was shouting so loud’.

‘Just to be clear, I’ve seen plenty of people pray on flights before but never have I witnessed a call to prayer like this.’

The man is in fact performing the end of the call to prayer – a task that falls to the appointed ‘muezzin’ at a mosque.

Screens on-board indicate at all times the direction of Mecca and Muslims praying is not an unusual sight.

The redditor wrote online ‘I’ve taken this route many times before and have never seen this before. People pray pretty frequently, but that doesn’t really affect anyone else.’