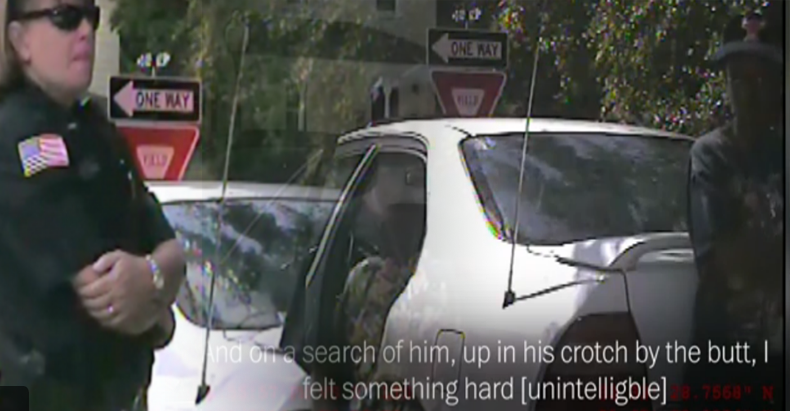 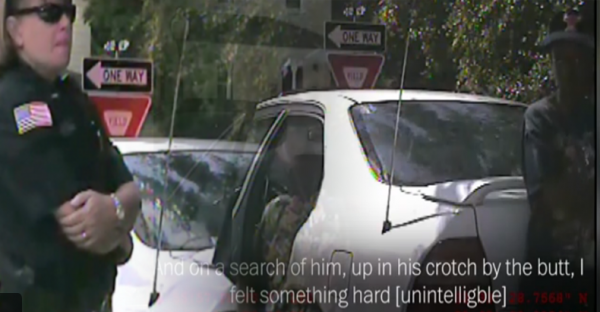 Aiken, SC — On Oct. 2, 2014, Lakeya Hicks and Elijah Pontoon had broken no law, violated no traffic code and were simply driving down the road when they were targeted and pulled over by Aiken police officer Chris Medlin.

Medlin explained to the couple that he stopped them because they had temporary tags on the car. According to South Carolina law, there is nothing wrong with temp tags, so long as they aren’t expired. Hicks explained that she had recently purchased the car, and that was the reason for the tags. Medlin even tells the couple that the tags check out.

The stop, which never should have happened in the first place, should have ended right then. However, Medlin, working on a hunch, just knew that this couple was up to no good. Medlin orders Pontoon out of the car and handcuffs him — for no reason.

“Because of your history, I’ve got a dog coming in here. Gonna walk a dog around the car,” says this tyrant, and apparently racist cop. “You gonna pay for this one, boy.”

Pontoon has no history though, at least not since 2006, which is hardly a reason to stop the man now.

After unlawfully detaining the couple, with no probable cause, a drug dog shows up — but it finds nothing. Again, this illegal stop should have ended here. But it didn’t, and, instead, got much worse.

By now, there are four officers on the scene, one of whom is a female. Medlin then tells the female officer to “search her real good,” referring to Hicks. While the search of Hicks happened off camera, according to a federal lawsuit filed by attorney Robert Phillips, it involved exposing Hicks’ breasts in the populated area. Mind you, this is at noon on a Friday.

After sexually assaulting Hicks and finding nothing, the cops then direct their attention to Pontoon.

Again, the cops appear to move out of the view of the camera to protect themselves while sodomizing a man on the roadside. However, the graphic audio leaves no room for speculation as to what happened.

As cops launch their assault on this innocent man’s rectum, Pontoon complains that they are grabbing his hemorrhoid

“I’ve had hemorrhoids, and they ain’t that hard,” replies the apparently racist, and now rapist, cop.

As Radly Balko points out in his article on the Post, at about 12:47:15 in the video, the audio actually suggests that two officers may have inserted fingers into Pontoon’s rectum, as one asks, “What are you talking about, right here?” The other replies, “Right straight up in there.”

The cops continue their attack on this innocent man for several minutes moving their fingers in and out of his rectum searching for non-existent drugs.

Much to the rapist and racist cops’ shagrin, they found nothing. Medlin then tells Pontoon to turn around and says, “Now I know you from before, from when I worked dope. I seen you. That’s why I put a dog on the car.”

Medlin effectively admits that he had no probable cause to stop the couple, as Pontoon lacks any charges for the last decade. He then lets the couple off with a “courtesy warning.” However, as the Post points out, according to the complaint, there’s no indication of what the warning was actually for. Perhaps it was to warn to steer clear of police officers in Aiken.

The vileness of the state’s wicked and immoral war on drugs has reared its repugnant face. When will the rest of society see that face and wake up to this atrocity? When will the people say “enough is enough,” and that finger raping innocent people on the roadside in search of arbitrary substances is no longer welcome in our culture?

Please share this article with your friends and family to help wake them up to this very real American Horror Story.