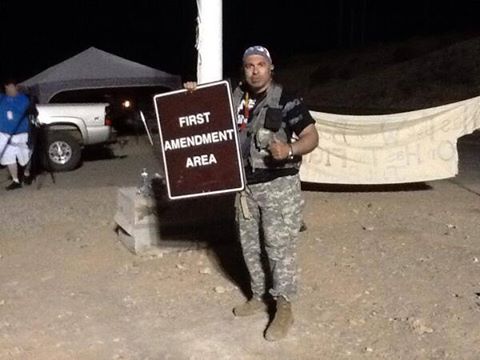 Oregon standoff/Bundy Ranch reporter and Marine veteran Pete Santilli arrived at the Henderson Nevada Detention Center on March 29 to be arraigned on March 30. Though Santilli has been arrested on obvious trumped up charges, he remains steadfast about his decision to go and report on the Bundy Ranch siege in 2014. He also pointed the finger at Daniel P. Love, who was the lead investigator in a 2009 investigation, which resulted in a wrongful death lawsuit, with Oregon Special Agent in Charge Greg Bretzing, who also led the Oregon standoff. Love was also in charge at the Bundy Ranch siege.

According to Deb Jordan, who is the co-host for The Pete Santilli Show, Pete wants everyone to know that his “resolve has not changed.”

In an interview with Santilli, he said, “When I arrived at Bundy Ranch in April of 2014, there was a clear and eminent danger and threat to my life, and that of the Bundy Family who were protesting within their rights, as given to them by God and outlined in the United States Constitution. It is now, as it has always been that my testimony is; The United States Bureau Of Land Management, under the direction of Daniel P. Love, was poised in an aggressive manner, and having already displayed a willingness to physically harm the family and anyone who supported their protest, I believed my safety and the safety of everyone on that Ranch was in question and we were all in danger of losing our life.”

“I never carried a firearm – I never picked up a rock – I never touched a Federal Officer – nor did I threatened to,” said Santilli. “Within the many archived hours of footage you will be hard pressed to see me or Cliven Bundy and many others charged, with a weapon pointed at anyone. The only people pointing weapons at anybody when I arrived at Bundy Ranch was, as it has always been, the BLM. They can charge us with whatever they like, but it certainly doesn’t make it so.”

Santilli even took the opportunity to speak with Daniel P. Love in an attempt to get him to reconsider what he was engaging in against the Bundys.

“He gave me the same bullheaded response he was giving everyone else,” Santilli said. “He challenged me with a threat. Just like he challenged the Bundy Family with threats. Did I threaten him back — NO — I told him the truth, and the truth was these people were resolved to meet him head on. I tried my best to convey to him that this was not going to end well if he came at these people with his pride and guns in their face.”

“I still stand on my initial belief that Daniel P. Love is fully responsible for what happened at Bundy Ranch, and nobody else,” Santilli added. “I stand by my decision to go to Bundy Ranch. I stand by my decision to ask for the help that Sheriff Doug Gillespie refused to give. I stand by Cliven Bundy and his family and am proud to do so. The Government failed to protect Cliven Bundy — It failed to protect peaceful protestors — It failed in every way a government could fail and now they blame the people for doing what they [the government] should have done.”

Mr. Santilli also says that things were pretty sensational at Bundy Ranch. Yet, he believed what he was doing by providing coverage via reporting is to be protected under the US Constitution’s First Amendment.

If anyone doubts that the feds were engaged in criminal actions of stifling free speech and the right to peacefully assemble in protest, just check out what happened at Bundy Ranch.

“Having the United States government threatening to kill people is a pretty sensational thing to have happen,” he said. “Was my speech overly urgent? Was my speech offensive? You bet. But the truth is the truth. From the Governor of Nevada down to the Nevada State Representatives, and every politician in between — From Reporters like myself, to Fox News Dennis Michael Lynch — we all saw and reported on the fact that the BLM was out of control and acting outside the constraints of the United States Constitution and threatening to kill people.”

You can read some of the comments of the people that Santilli mentions here.

Indeed Santilli did just that, and so did many others. Not only that, but he also covered much of what took place in Oregon before being arrested for what took place at Bundy Ranch.

While Pete, the Bundys and other political prisoners who are incarcerated currently have stood their ground, Santilli remains steadfast in his resolve to see everything they stood for followed through on.

In a letter I received from Santilli this week, he wrote that he truly believes he is being persecuted for his opinions and relentless pursuit of the truth.

Santilli also said that receiving letters from people is the “highlight of his day.”

Friends, I don’t know if the founding fathers, those that gave their all, many languishing in prison as the War for Independence raged, received the kind of encouragement that we can provide to these men, but I know we have that opportunity. Pete and others need to be encouraged and they need financial support.

If you are so inclined, please consider donating to help Pete at ThePeteSantilliShow.com/donate or write him at: