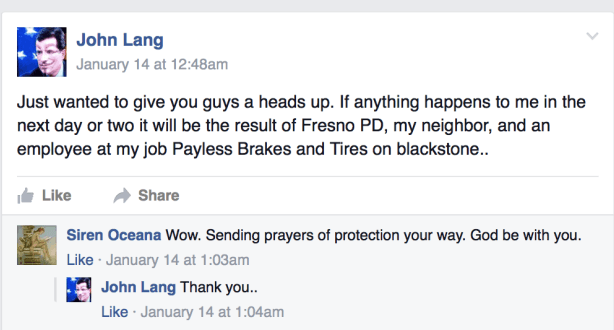 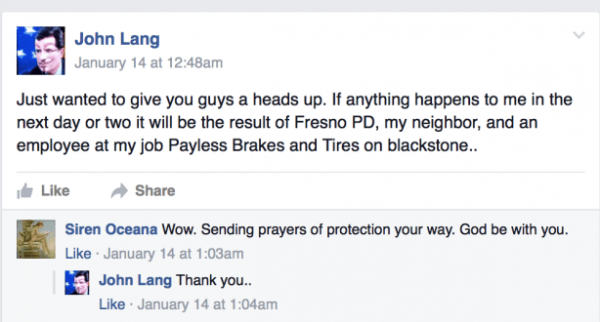 Fresno, CA – An activist named John Lang was found stabbed to death inside of his home in January after predicting that he would be killed by police in his area. His house was also set on fire in the struggle that killed him.

According to initial reports, his neighbors noticed smoke coming from his house around 3:00 in the afternoon. When fire crews made their way inside they discovered Lang’s body lifeless and bleeding from several stab wounds.

Lt. Joe Gomez with the Fresno Police Department said that it was “Unknown if the stab wounds caused the death or the smoke inhalation, it’s too early to tell.”

According to the investigators, who had initially called his death suspicious, Lang stabbed himself and then set his house on fire.

The report stated that Lang had high levels of carbon monoxide in his system along with three superficial, self-inflicted stab wounds to the chest area.

Was Lang able to stab himself multiple times, then conceal the weapon, and then somehow set his house on fire while bleeding out?

There is certainly the possibility that Lang did kill himself — although stabbing one’s self multiple times, hiding the weapon so police could never find it, then setting your house on fire without leaving a trace — is unlikely.

It is also important to note that Lang was well-liked by most of his neighbors, many of whom were shocked by the incident and in disbelief that the man had any enemies.

According to predictions made by Lang himself just days before, he knew it was coming.

Did Lang kill himself to become a police activist martyr? Or, is the public not being told what really happened?

After his death, police and local media attempted to downplay the harassment Lang faced from local officers, but his YouTube channel documents it well.

In the days before his death, Lang was insistent that his life was in danger, and that if he died, the Fresno Police Department would be responsible. On the next day, January 15, he attempted to contact the local news about his concerns. The next day, on the 16th, Lang noticed a suspicious van near his house and recorded a man hanging around outside of the vehicle, looking very tense and speaking to one of the occupants inside. Lang posted the following video along with this message: “If I turn up missing or dead tomorrow remember this Van. I think I seen a couple of guys sneak out the side door and into the building when it was parked in the carport this afternoon. I’ve been causing the City of Fresno a lot of problems recently which I now regret..Sign on the Door said Guarantee Carpet Cleaning Fresno.”

A day later, on January 17th, he wrote the following open letter to the FBI and the DOJ:

Open Letter the USDOJ and the FBI I am fairly certain that Fresno Law Enforcement is trying to set me up on some type a charge related to child pornography. I’ve been trying to figure out why they would send Child Molester George Adams Ramirez my way when I was renting the property next to me for Don Green. Also, I was at a loss as to how Fresno LE was able to turn so many people against me so quickly. The only thing that makes sense coupled with George Ramirez situation is if Fresno LE told these folks I was a child porn suspect. Imagine a police officer dressed in his official uniform pulling up in a police cruiser. Imagine the same police officer or detective telling a group of coworkers of the accused or other folks that said the person is a bad guy who is under investigation for the crimes of child pornography, and cops would like their help in putting a really bad guy away. This would be a no brainier for most reasonable people. There is no more heinous, hideous, and inhuman crime than that of a child porn person. This crime evokes more human emotion than any other. And it is to that effect that Fresno Law Enforcement uses to suit their purpose in my situation. It’s Fresno Law Enforcement’s “weapon of mass destruction”.

This would also explain why the FBI shows little interest in my pleas for help. There has long been a belief in Law Enforcement circles that if someone is guilty of something, then helping that process along by fabricating evidence is completely acceptable. This rational can provide a loophole for truth and justice to be ignored when an innocent person is charged or suspected of crimes, as it is with my situation. Let this example serve as a warning to all my activist and blogger friends. We are by no means free. If and when the Government targets us, we are completely and utterly done, and there is really nothing we can do about it. Through my example, the Government is trying to drive home the point that they want obedient, submissive, and loyal subjects. And they will settle for nothing less.. I’m also fairly certain I’ve figured out how Fresno Law Enforcement handled the actual access and internet distribution of the offensive material. Let’s just say that the FEDS should re-investigate all Child porn cases in Fresno where ATT Internet Services provided the Internet service. Especially cases where the accused had a conflict with the City Of Fresno or high ranking City of Fresno personnel. Other elements are simply handled by planting various elements of false evidence here and there once they enter a residence. That is why Fresno LE was so determined to get a search warrant for an official home entry in my case. As I’ve mentioned in the past Fresno LE had already illegally and secretly entered by home, copied my hard drives in order to get a good game plan for the eventual false arrest. There also appears to be a pattern here. Anyone who has ever talked publicly about, accused, or discussed Jerry Dyer’s supposed sex scandal with that 16-year-old girl has found themselves in some type of legal peril within a few short years.. And with this letter I have for certain signed my death warrant with Fresno LE. Kind Regards, John Lang Fresno Ca 93728

Just three days later, on January 20th, Lang was killed as he predicted.