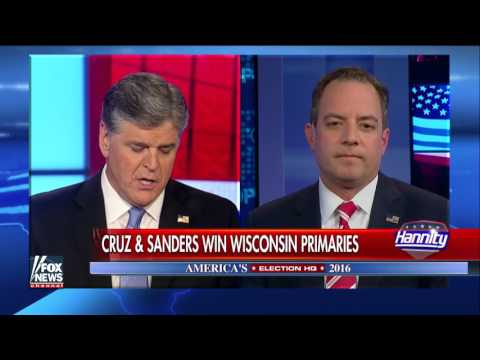 Despite Ohio Governor being way behind in delegate count

After yesterday’s Wisconsin primary results came in, RNC Chairman Reince Priebus suggested to Sean Hannity that Ohio Governor John Kasich could still end up being the nominee despite the fact that he is far behind both Trump and Cruz in the delegate count.

Hannity asked Priebus if he thought Republican voters would feel “outright anger, frustration, and a sense of betrayal” if Trump had a 400 delegate lead but was not given the nomination.

“In your opinion as the state chairman that the nominee of your party are you confident tonight will be either Donald Trump or Ted Cruz? Are you confident?” asked Hannity.

“This is what I’ll say, I think the nominee will be someone who’s running,” responded Priebus.

Hannity: Well, there’s three people running. Mathematically John Kasich can’t catch up to them. You won’t say for the record that it won’t be Cruz or Trump?

Priebus: No, I’m going to say it’s going to be somebody that’s running.

Hannity: Does running mean it’s going to be Cruz, Trump or Kasich?

Priebus: I’m saying it’s going to be one of the three people running.

Hannity: How can Kasich get there without leapfrogging over people that have millions of more votes and more delegates?

Priebus: You’re going to have to ask John Kasich. But I’m not going to something that’s going to be an affront right now to John Kasich.

“The GOP will ensure that the RULES Committee changes Rule 40 so as to enable Kasich to be the GOP nominee in a contested/brokered convention in July. And Priebus knows it,” commented Katherine Park.

“Hannity was stunned… and ticked off. We should be too. This primary election process is a farce.”

Priebus prompted controversy after a separate interview with Charlie Sykes on 620AM in Wisconsin during which the RNC Chairman scolded Trump supporters unhappy at the prospect of a brokered convention.

“By the way, this is a nomination for the Republican Party,” Priebus told Sykes. “If you don’t like the party, then sit down. The party is choosing a nominee.”

After Cruz’s win in Wisconsin, the Trump campaign accused the Texas Senator of illegally colluding with his own Super PACs in an effort to steal the nomination from Trump.

“Ted Cruz is worse than a puppet. He is a Trojan horse, being used by party bosses attempting to steal the nomination from Mr Trump,” the campaign said in a statement.