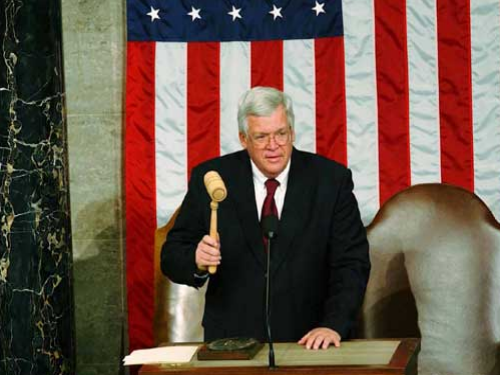 Isn’t it interesting how politicians are so frequently caught with their pants down (sometimes literally) doing or approving of unspeakable acts? There’s doubt about it, positions of power have a tendency to attract the worst human beings, or inspire the worst behaviors in otherwise good people. Dennis Hastert would certainly fall under the former of those two categories.

The former congressman from Illinois was the longest running Republican Speaker of the House until he was unseated by Nancy Pelosi in 2007. However, his crimes go way back to before his political career. Last year he pleaded guilty to financial crimes, which led prosecutors towards a paper trail of payoffs.

They have asserted that Hastert molested several boys decades ago when he was the coach for a high school wrestling team. The documents they found while investigating his financial crimes show that he had been giving hush money to one of those students for years, which amounted to about $3.5 million. The man he was paying is one of 4 who have admitted to being sexually abused by Hastert.

According to the prosecution: “The actions at the core of this case took place not on the defendant’s national public stage but in his private one-on-one encounters in an empty locker room and a motel room with minors that violated the special trust between those young boys and their coach.”

If that’s not despicable enough, Hastert actually had the gall to ask one of his victims for help with his financial charges.

The Tribune reports: “With the sentencing hearing looming, a source said Hastert called one of Individual D’s relatives, hoping to get a letter to show Hastert had done good things with his life; that letter could help persuade [U.S. District Judge Thomas Durkin] to give Hastert a more lenient sentence.”

So did it work? Not so much: “Individual D then made a call of his own. He told federal authorities he would prepare a statement to be used in court detailing what Hastert did to him.”

Unfortunately, these crimes were committed in the 60’s and 70’s, so the statute of limitations has expired. Hastert’s lawyer claims he has expressed remorse for his actions. “Mr. Hastert is deeply sorry and apologizes for his misconduct that occurred decades ago and the resulting harm he caused to others…He will stand before the court having deteriorated both physically and emotionally, undoubtedly in part due to public shaming and humiliation of an unprecedented degree.”

That poor baby. It’s too bad this high-profile politician won’t get what he deserves. Not in this lifetime anyway.