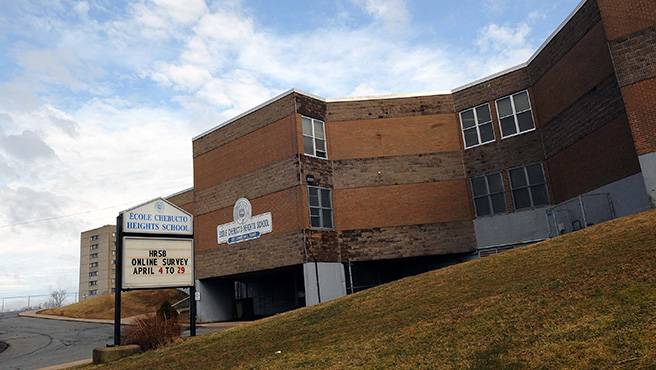 The left sacrifices its women, its children and whatever humanity leftists pretend to have for their totalitarian objectives cloaked in smiley emoticons. If you missed the Munk debates in Canada over Muslim refugees from jihad countries — watch it here. Watch the left elites laugh at refugee rape victims.

One boy yelled “Muslims rule the world” while choking a third grade girl. School staff intervened, but to her knowledge, the students were not disciplined further.

On the soccer field, Muslim refugee students reportedly take their thumb and slide it across their neck from left to right while staring into the eyes of their competitor; imitating the slicing of the throat.

According to the Halifax Regional School Board, refugees began registering at Chebucto Heights, located in the Cowie Hill neighbourhood of Halifax, in mid-February. (STAFF)

Reports of students choking, pushing, slapping and verbally abusing their fellow classmates are causing parents to worry about the school’s disciplinary action.

“There has always been some fighting and bickering going on at the school but never to this degree,” said Missy, the mother of two children who attend Chebucto Heights. She asked to be referred to by her nickname for this story.

Missy said her daughter, who is in Grade 3, was choked on Monday and Thursday last week by two refugee boys. A chain was used on both occasions, but she cannot confirm the size or strength of the chain. She said one boy yelled “Muslims rule the world” while choking her daughter. School staff intervened, but to her knowledge, the students were not disciplined further.

According to the Halifax Regional School Board, refugees began registering at Chebucto Heights, located in the Cowie Hill neighbourhood of Halifax, in mid-February.

School board spokesman Doug Hadley said, as of last week, there are currently 252 refugee students enrolled in the region, with another 71 waiting on settlement of permanent housing.

Missy’s son, who is in Grade 5, has also been the subject of rough play on the soccer field. During games, refugee students reportedly take their thumb and slide it across their neck from left to right while staring into the eyes of their competitor; imitating the slicing of the throat.

Missy said the school’s response to this and other on-field violence was to cancel intramurals and soccer. But cancelling of recreational activity is not beneficial to students like Missy’s son who has ADHD and relies heavily on physical activity.

“Soccer is what gets my son through the day,” she said.

When asked about the violence at Chebucto Heights, Hadley said he couldn’t confirm whether an individual student had been involved in any behaviour that broke the board’s code of conduct.

He said there’s no connection between the cancellation of extracurricular activities and any violent behaviour. “There’s a term teacher at Chebucto Heights that is finished their term in the next week or so, and they just finished the unit on soccer,” he said. Intramurals will resume in May when the next term teacher begins.

Another mother, who asked not to be named, said her daughter was slapped after she and a classmate disagreed in the schoolyard. Her daughter reported the incident to her teacher.

“The school didn’t even call me to let me know.”

She called and left a message, but said no one has returned her call. She said her daughter begs not to go to school because of the persistent bullying.

A language barrier could be a factor. Many refugee families do not speak English and integrating students into a primarily English speaking environment is bound to cause a few problems.

Missy suggests having an interpreter on staff to help new students understand curriculum or the reason for disciplinary action. “I’m all for the transition,” said Missy.

“I just think there should be people in the school to help and guide them.”

The school board says there are currently 19.5 English as a second language teachers working in regional schools. “We have a long history of welcoming newcomers all over the world to Nova Scotia,” said Hadley. He encourages an open stream of communication between the school staff, students and parents.

“It doesn’t matter if the student is new to Canada or if they have been in school for many years in our system,” said Hadley. “Schools would address it no matter who the child is the same way.”