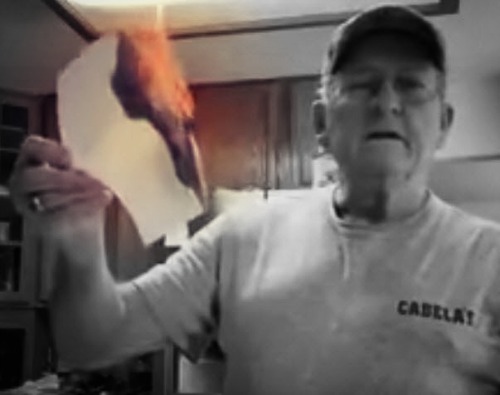 This man just filmed himself burning his Republican voter registration and uploaded it to YouTube.

“Republican party, take note: I think you’re going to see a whole lot more of these. I’ve been a Republican all my life but I will never be a Republican again.”

He’s another angry Coloradoan who feels disenfranchised by the fact that the Colorado GOP canceled their primary and essentially handed a basket of 34 delegates on over to Ted Cruz without a popular vote.

This move was actually announced back in August when the GOP Executive Committee voted to cancel the poll “after the national party changed its rules to require a state’s delegates to support the candidate who wins the caucus vote,” according to the Denver Post. “The move makes Colorado the only state so far to forfeit a role in the early nomination process, according to political experts, but other caucus states are still considering how to adapt to the new rule.”

The Colorado GOP hasn’t even given a bad lie as justification for doing this to its voters (via another DP article):

GOP leaders have never provided a satisfactory reason for forgoing a presidential preference poll, although party chairman Steve House suggested on radio at one point that too many Republicans would otherwise flock to their local caucus.

Wait, what? Since when does the GOP get upset because too many people might vote.

Imagine that: party officials fearing that an interesting race might propel thousands of additional citizens to participate.But of course that might dilute the influence of elites and insiders. You can see why that could upset the faint-hearted.

Fury is spreading across Colorado as it is just now sinking in for one million Republican voters there that Super Tuesday is coming and they weren’t kidding around. No vote in Colorado. No nothing. Cruz just automatically… wins.

How is it possible that the people of the great State of Colorado never got to vote in the Republican Primary? Great anger – totally unfair!

The GOP really has apparently declared war on its own voters over Trump.

People are starting to understand this and revolt against the system. Because of stunts like this, pundits are already forecasting that Cleveland will be haunted by the ghosts of Chicago 1968, when some 10,000 protesters came up against police in a violent clash. Cleveland police have already stocked up on riot gear ahead of the Republican National Convention to be held there in July.

It’s amazing their aren’t more people like the man above lining up to do the same thing. At least in Colorado, they are honest with voters about how their votes don’t really matter.

“What do you think is going to happen when millions more like me do the exact same thing? Good bye GOP. I will not be forced to vote for somebody that I don’t want to. You’ve had it. You’re done. You’re toast.”