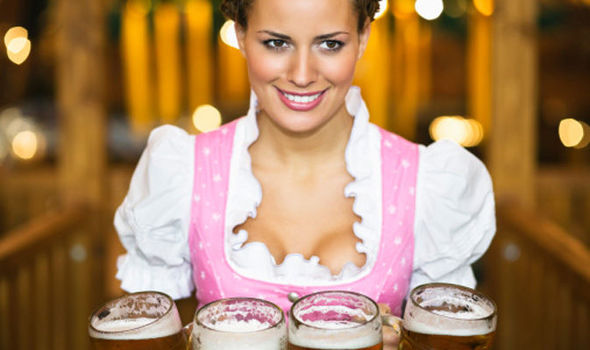 The Merkelistan Stasi. Germany with another fascist leader. Remember, Hitler loved Islam, too. Merkel brings Islam to Germany and submits to it.

This is surrender. Instead of enforcing the law and holding the Muslim migrants accountable for their crimes (and deporting them, and stopping importing more), Germany is beginning to surrender and adopt Islamic mores. Anywhere Islamic law and mores conflict with Western law and mores, it is Western mores that must give way. This is a sign of the Islamization of Germany.

Last week, I reported that Germany would be segregating some swimming pools because of Muslim migrant sex attacks. So this is clearly a trend. Schools and canteens in Germany are “banning” the serving of pork to avoid offending Muslim migrants.

“First it was sausages..now Germany ‘BANS’ sexy women in adverts after Cologne sex assaults,” By Selina Sykes, The Express, Apr 13, 2016 (thanks to Armaros).:

GERMANY has announced plans to ban images of scantily-clad women in adverts in response to the sexual assaults in Cologne on New Year’s Eve.

German Justice Minister Heiko Maas said the move to ban ads which “reduce women or men to sexual objects” is an attempt to create a “modern gender image”.

The proposal, if introduced later this year, would see courts decide on what qualifies as sexist.

The plan has been called political correctness gone mad by its critics, who said it was the first step towards a “nanny state”.

It comes following a controversy over claims made by a senior politician that schools and canteens in Germany are ‘banning’ the serving of pork to avoid offending Muslim migrants.

“To demand the veiling of women or taming of men, is something known among radical Islamic religious leaders, but not from the German minister of justice.”

The move comes a day after the first case related to a string of sexual assaults and muggings against women across on New Year’s Eve went to trial.

The defendant, identified only as Toufik M, is accused of being part of a group of 15 to 20 men who surrounded a woman and groped her.

Thousands of women were sexually assaulted, attacked and mugged across Germany during New Year’s Eve celebrations.

The attacks were blamed largely on migrant men, fuelling a tense debate on Germany’s immigration policy.

Germany’s Association of Communications Agencies (GWA) described Maas’ proposal as “completely absurd”, arguing that the discussion about rules on advertising would be reduced to a “matter of taste”.

A draft amendment of the law relating to advertising is due to be discussed by the German government shortly.

The German government also released a series of posters telling migrant men how to respect women in response to the Cologne sexual assaults.