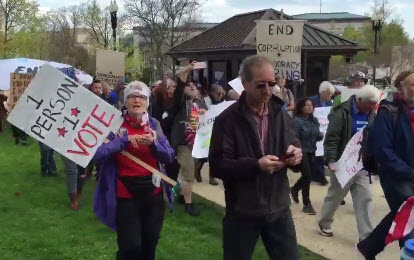 Over four hundred people have already been arrested at the Capitol for protesting for fairer elections against the corporatocracy. Some say it’s 500. Capitol police say it is record numbers.

All these people did was peacefully assemble to protest government corruption. After all it’s 2016, the year our nation figured out American elections are totally rigged.

The First Amendment is our most basic right in America. It’s first one the list. The right includes, “the right of the people peaceably to assemble, and to petition the government for a redress of grievances”.

Lately every time people attempt to peacefully do that, the government sends down their henchmen to arrest them. That’s how they handle the petition, the grievances.

Now Capitol police have decided to arrest yet another 85 people, this time senior citizens, for peacefully assembling at the Capitol to protest our rigged elections.

Jill, an elderly election worker from New Jersey who was not arrested and asked that her last name not be used, said she was there to support efforts for less money in politics and for elections with candidates who are not in the pockets of wealthy donors.

“I think it’s become apparent to a lot of us that the whole political process in our country is really under the control of a handful of people, and by the time we get to make a choice in November, the fix is already in, because all of the candidates, typically, are ones who are going to do what the establishment, the oligarchy, wants from them,” Jill said. A supporter of Vermont Sen. Bernie Sanders, she also expressed concern about irregularities at polling places, with electronic voting machines that don’t accurately record votes, calling the election process in many places “a travesty.”

Many of us have known this for a long time, but it’s heartwarming to see many more new people and especially older generations are waking up.

One has to wonder… are the cops sent down to arrest peacefully elderly protesters even remotely starting to feel like schoolyard bullies? Like a goon squad? Like the expendable bad guys in a cartoon who “are going to do what the establishment, the oligarchy, wants from them?”

The people were officially arrested for “unlawful demonstration activity” because they refused to disperse. The Capitol Police processed and released them on the scene. Makes you wonder why they even bothered? What was the point?

Just to symbolically treat elderly people exercising their First Amendment rights as enshrined in the Bill of Rights like cattle?

How can these cops look themselves in the mirror and not see this? Not see what kind of minions they have been reduced to?

They are standing on the wrong side of the line.