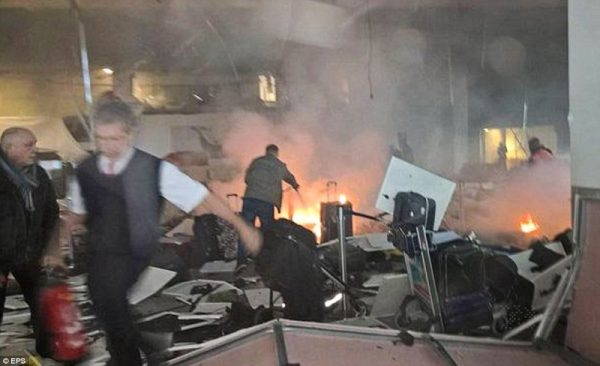 Boom. There it is. Policy failure after policy failure, and still the political and leftist elites hit bottom and keep digging. Their de-radicalization programs are a farce. How can you de-radicalize if you ban discussion of the ideology and religious motivation these savages are radical about? Insanity.

How about once, just once, we approach it with the understanding that it is Islam and it is a religious war? This moronic experiment is an abject failure. 15 years after 9/11 and over 28,000 deadly Islamic attacks since — it’s time to face reality.

The Syrian-origin Swedish passport holder arrested in Belgium last week for his involvement in the Brussels bomb attacks is a former poster boy for Sweden’s efforts at integrating migrants into their society.

Now accused of murder, and captured on CCTV cameras carrying bags which contained the explosive devices which killed 32 civilians, Islamist Osama Krayem had once been hailed as a model of integration. A former employee of the city of Malmo, at the age of 11 Osama starred in a documentary about migrants in Sweden.

Both of Osama’s parents are Syrian migrants to Sweden, and have told tabloid Aftonbladet they wanted to see their son integrate into Swedish society. The family featured in a 2005 documentary called ‘Without Borders — A Film About Sport And Integration’, in which football-mad Krayem demonstrated how the Malmo football team had helped him settle into Swedish society.

The club had run an integration project, encouraging local migrant youth to play football. Club marketing manager Christer Girke said of the programme: “We wanted to show the importance of integration… the boys were to go to the association to see what the other Swedes did and get to know the [football] associations were important, how it can be a gateway to jobs and much more”.

At the time of the film’s release, he had told local media: “90 percent of our members have a migrant background, as this integration is something I think a lot about. With this project we want to take responsibility for the society we all be living in formed. And how we are formed as people”.

A school friend told the paper that he was “noticeable” by the fact he didn’t party or drink because of his religion. Even when Krayem started posting pictures of himself on Facebook with Islamic State flags and guns, his old friends didn’t think anything was wrong. One said he just thought Krayem was trying to be “cool”, and that was just what “young people are doing”.

Shot with a budget of £22,000, an opening-night review of ‘Without Borders; in Sydsvenskan hailed the “football mad sons” of the Krayem family — the central players in the film — as showing “the essential role of sport for integration”.

When Osama Krayem got a job with Malmo city council as a management intern, he may have been displaying the outward signs of assimilation that were expected of him, but what his employers did not know is that he was saving his salary to buy tickets to Syria. He worked for a year, before suddenly failing to turn up for work one day in 2014.

Osama had successfully joined the Islamic State and started posting pictures of his exploits on Facebook. A year later, Krayem has swapped the migrant enclave he had grown up in — Rosengard — for another. Traveling through Greece as a refugee, he came to reside in Molenbeek, Brussels, he took on took a leading role in organising the bomb attacks.

That superficially well integrated migrants could be plotting attacks or engaging in criminal activity is not a phenomenon limited to Sweden. Breitbart London reported in January on four “unaccompanied minor” migrants who sexually abused young girls at their new school shortly after arrival.

The headmistress of the school responsible for the boys, who abused girls as young as 14, said they were ““integrating themselves very well” into Austrian society.