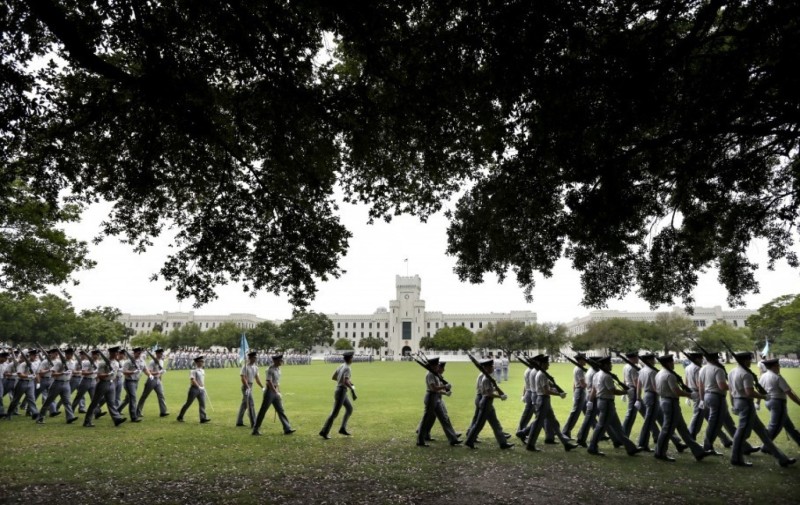 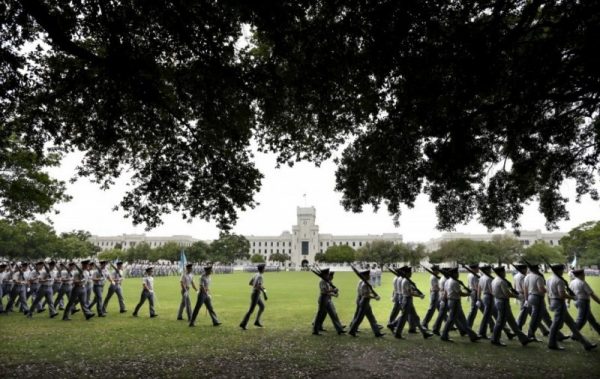 Everywhere American law and Islamic law conflict, it is American law that must give way. If such an exception is made, it would be a travesty. Never in its illustrious nearly 175-year history has the school ever granted a religious, or other, accommodation that resulted in a change to the uniform. This would be a first — for Islam. Now, that’s rich. The irony is not lost on me, or you, I am sure.

The Citadel is considering a request from an admitted student that she be allowed to wear a hijab in keeping with her Muslim faith, a move that would be an unprecedented exception to the school’s longstanding uniform requirements.

If the request for the traditional Muslim hair covering is granted, it apparently would be the first exception made to the Citadel’s uniform, which all cadets at the storied public military college in South Carolina are required to wear at nearly all times. (At beaches, for example, college rules stipulate that, “Cadets will change into appropriate swimwear upon arrival and change back into uniform when departing.”) A spokeswoman said that to her knowledge, in its nearly 175-year history, the school has never granted a religious, or other, accommodation that resulted in a change to the uniform.

As word spread on social media, students, alumni and others responded strongly to the idea of an exception being made at an institution where uniformity, discipline and adherence to rules are defining values, where loyalty to the corps is paramount and individual preferences are trivial.

That the first exception might be for a Muslim student was an additional provocation for some — and welcome symbolism for others —  in the midst of a national discussion about Islam in U.S. culture.

I am sure ISIS welcomes it.

Republican presidential front-runner Donald Trump has called for strict limits on Muslims entering the U.S. because he considers the religion one of hatred and violence, while President Obama has said the fight against extremist terrorism is not a fight against one of the world’s largest religious faiths.

Nick Pinelli, a cadet working in marketing for a private company and DJing who is expecting to graduate in May, wrote a long post about the issue on Facebook Wednesday with his objections, including:

The Citadel should be able to tell the prospective student to wear what they tell her to wear. Not because they are concerned with the religion she is trying to practice or the speech expressed by doing so, but because they are concerned with the execution of an essential part of the system the Citadel puts in place. Agree or not with the system, this institution has that system for a reason (that most maintain has worked exceptionally for almost 200 years) and the disruption of that system by exempting those who don’t wish to conform is legally pronounced a slippery slope that will lead to the further disintegration of said system. Unfortunately, after seeing what has happened in the military in similar cases, the school is being financially responsible in not fighting it.

He pointed out that he doesn’t speak for the Citadel (which he doesn’t blame for considering the request) or for the Trump campaign, for which he is an intern, and wrote:

If I valued liberal ideology, I would go to UC Berkeley. I’d wear, say, and do whatever I wanted and it wouldn’t cost the university any time or money for me to do so. If I valued conservative ideology and wanted to challenge myself in a military environment, I would go to the Citadel. It’s no secret that you can’t wear what you want when you’re at the Citadel. You’re punished even for wearing what you want when you’re not on campus. But, those who come here are signing up for that, no matter how much they hate it (we do). So it’s not unfair to those people who want to join an organization with the intentions of excluding themselves from the regulations, it’s unfair to those who practice within the realms of those regulations. It’s unfair to the school having to change rules and adjust to the individual, when the individual could’ve gone to USC without incident. Your expression of self shouldn’t place a burden of cost on others.

This girl should be welcomed to the Corps with open arms, as should any person of any religion, race, gender, or identity. That’s equality. It’s not equality to let one of those groups follow a different set of rules

Pinelli wrote about a cadet whom he admires, a young man with cerebal palsy. “As you can imagine, one with such a physical condition would face challenges meeting the standard for physical fitness. Instead of showing up seeking a different set of rules, he jumped right into a challenge that was a perpetually uphill battle. Instead of saying he shouldn’t have to pass the PT test because of his disability, he failed it time and again and suffered the ramifications of holding himself to the same standard as the rest of the Corps.” He did not give up, and ultimately passed the test.

Pinelli wrote that another cadet had called him a bigot for objecting to the idea of an accommodation for a Muslim student. But it was not her religion but her “sense of entitlement” in asking for the accommodation that bothered him, he wrote.

Someone wrote in response to his post that if the rules were not changed, “she would either have to break the rules of the Citadel or the rules of her religion.” Another wrote, “… I  hope the best for this young lady. … I applaud our school and administration.”

But many voiced strong opposition to the idea of altering the college’s traditions. One cadet responded:

It doesn’t bring harm to the school. But it is a blatant disrespect to what a military school stands for. We come here and willingly give up our individuality and become a part of a group that upholds the time honored traditions of this school. So for anyone to come, not even walk through our hallowed gates, and force the school to go to extreme lengths both financially and resourcefully, to accommodate one person, isn’t right. I can’t wear a tshirt around campus that says “I love Jesus”. Why? It’s not because of religious intolerance, it’s because it does not meet uniform requirements that all 2400 of us are held to. Am I offended that I can’t wear a religious tshirt? Nope. Why? Because I accepted the system that I have become a part of, and I’m willing to let it change me and join a long line of men and women who I will be honored to call my brothers and sisters.

The college, founded in 1842, has won praise for its academics as well as the leadership skills taught to its 2,300 or so undergraduates, about 170 of whom are women (the school began admitting women in 1996). The college has several Muslim students enrolled now, a spokeswoman said.