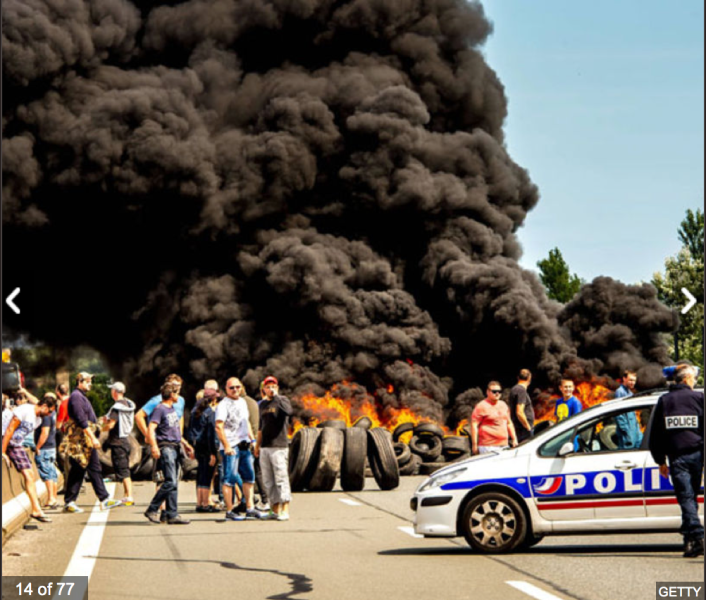 “Hundred-strong packs of Muslim migrants wielding iron bars becoming a regular sight for truckers….” These truckers need guns. No one is saying it, but we are seeing the beginning of a civil war (if the people fight back). If not, it is the Islamic conquest of Europe.

The history books will not be kind to Frau Merkel and the EU. Charles Martel was revered; Angela Merkel will be reviled. People will spit when they hear her name.
Below: Scenes from Calais, France

CALAIS was clearing up today following one of its worst nights of terror after gangs of migrant thugs attacked a family in their car and set fire to barricades in the road to stop terrified truckers.

Skirmishes broke out across the lawless port town as roaming packs of migrants apparently carried out a mass violent bid to reach Britain.

Videos emerged online showing migrants setting fire to barricades made of wood and tyres in the middle of the motorway near the port, to force lorries to stop so they could break inside.

And one woman posted photographs of her friend’s smashed up car, which she says was attacked by a gang of 15 migrants wielding stones and sticks who stole their belongings and left them with serious injuries.

The latest violence comes after haulage groups warned there has been a “serious breakdown in law and order” at Calais, with hundred-strong packs of migrants wielding iron bars becoming a regular sight for truckers.

Footage posted online by the campaign group Les Calaisiens en Colere shows a barricade of tyres in the middle of the motorway near the port, which has been set on fire to force lorries to stop.Officials are also seen picking up large tree branches trees off the carriageway, which it is believed are being used for the same purpose.The film – shot overnight on Thursday – then pans to a large group of migrants rushing onto the tarmac and apparently trying to break into lorries and cars that have been caught up in the ensuing queue.

Her warning comes amid worsening migrant violence at Calais

Elsewhere a furious French woman took to Facebook to post photos of her friend’s smashed car, which she says was attacked during the same night of violence.In a post that has been shared more than 8,000 times Emeline Vetu said the migrant chaos in Calais “shames France” and said the police are not doing enough to restore order.She rages: “My friends were attacked yesterday on the highway by 15 migrants with sticks and stones.”It was without reason – a gratuitous beating. At the moment, they no longer have any ID documents, any money, or their car…they were just left with a head injury and a dislocated jaw.”

Migrants are becoming increasingly desperate in their attempts to reach Britain

The shocking new violence comes after haulage groups warned that migrants are getting increasingly desperate and violent in their attempts to reach Britain following the dismantlement of a large section of the Jungle camp.Groups of migrants have been pushing shopping trolleys off motorway bridges and using stones and iron bars to bring lorries to a halt, so that they can break in and stow away inside.At the beginning of the month a gang of 150 migrants armed with iron bars made a mass attempt to break into UK-bound lorries, with one being killed when they were hit by a truck.

Police have been overwhelmed by mass riots on numerous occasions

There are up to 10,000 migrants in and around Calais

Commenting at the time, Road Haulage Association chief executive Richard Burnett said: “We are saddened by the news that a migrant was killed but we have two questions to ask of the authorities in France.“First, given that the queues of lorries in an unprotected area was a predictable consequence of the strike, why were measures not put in place to provide adequate security for drivers in the Calais area?“Second, can we have firm assurance that drivers will not go unprotected when there is such a clear risk in future?“Calais Region President Xavier Bertrand has worked hard to start to restore security and confidence in the Calais route, including the clearance of the unregulated part of the migrant camp.  The events of the past 24 hours are a serious setback to those efforts and must not be allowed to be repeated.”