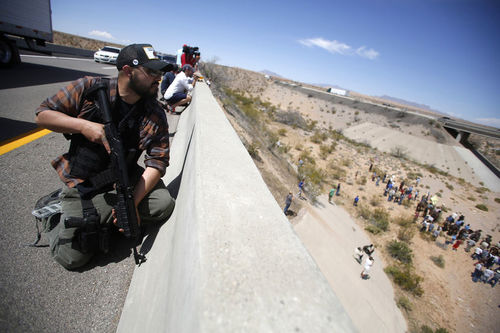 Our Federal Government is detaining political dissidents. Behavior normally ascribed to repressive regimes and totalitarian monarchies, the machine in Washington D.C. is working overtime to set a very dangerous precedent for the arrest, detention, and incarceration of Americans who exercise lawful rights to resist abuses from the very representative body that is tasked with preserving natural, unalienable rights. One need not look further than the incident on the I-15 overpass during what has become colloquially known as “The Bundy Ranch Standoff” to see this very situation unfold. While people like Harry Reid and other of his elitist colleagues would have the court of public opinion rule these individuals as dangerous domestic terrorists; the truth is almost 180 degrees the opposite. It is alphabet-soup agencies, acting under the authority of the Federal Government, who have become lawless in their egregious overreaches to repress individual liberties protected by the Bill of Rights. Their unlawful behavior is the cause that gives rise to the effect of resistance. The facts of what happened on the bridge that day along with what has recently unfolded should terrify every liberty-minded American.

Most don’t know his name, but they can identify a photo of him. On Saturday, 12 April 2014 a resident of Idaho named Eric J. Parker took a defensive posture on an overpass looking down on a group of Federal Agents who had created a tense, terrifying situation by reportedly stating over a bullhorn their intent to gas, and if necessary, exact lethal force upon a concentrated group of protesters comprised of men, women, and minor children. These protesters had peacefully, but vocally, gathered in a wash under I-15 where agents working under the authority of the Bureau of Land Management held around 400 head of cattle belonging to Cliven Bundy. Eventually, federal agents retreated releasing the cattle they had collected.

On Thursday, 03 March 2016, nearly 700 days after the incident on the bridge, four residents of Idaho who were present on the bridge were rounded up, taken into custody, and charged with a litany of crimes that can only be described as an avalanche of excessive litigation. Eric J. Parker and Steven Stewart, both of Hailey, ID. O. Scott Drexler of Challis, ID. Todd Engle of Boundary County, ID. Most people incorrectly make assumptions about what happened that day based on photos and news reports. Here are some facts that balance the narrative coming from both the mainstream media and the Department of justice.

The superseding indictment actually names 19 individuals, asserting that they were all part of a larger clandestine conspiracy to cooperatively act unlawfully against the Government. This is simply not true. Parker, Drexler, and Stewart left central Idaho on Friday, 11 April 2014 after having observed video of BLM agents tazing protesters and, in one instance, throwing a woman to the ground. They also utilized canine resources in their lawless, repressive tactics that day. Additionally, these men saw cordoned off areas established by the Bureau of Land Management that read “First Amendment Area. It prudent then to ask two questions. First, when did BLM obtain the right to tell people where they can and cannot exercise First Amendment rights? Second, and more importantly, did the indicted Idahoans travel to Nevada at the call and to the assistance of Cliven Bundy; or did they drive through the night that Friday because of what they saw as unconstitutional acts being carried out by Federal Agents? The US Attorneys argued the former while, in fact, the latter is true.

The issue of Cliven Bundy’s cattle, while a separate issue in and of itself worthy of examination, was not the genesis of the decision for these men to embark on their journey that day. They have always maintained that the issue was Federal lawlessness and overreach that they had observed the day before. Yet reading the criminal complaints and indictment, taking it at face value, one would believe that these men meticulously planned and executed an armed operation against the Government. Simply not true. What is even more disturbing is that the US Attorneys are moving to try all 19 men at once. Think about the implications of this maneuver. Bring 19 men in before a jury, then try to convince them that 4 of them had nothing to do with the larger issue. Nearly impossible. On a granular level, the cases of each of the 4 men from Idaho have their own intricacies that deserve a fair, individual trial; not to mention the gross level of differences between the cases before these men and the rest of those indicted.

So what actually happened on the bridge? The mainstream and DOJ would have you believe that heavily armed domestic terrorists took aim at Federal Agents in order to intimidate them into retreat. Laughably false. Patently untrue. A group of protesters had gathered in the wash under the bridge and began moving toward where Federal Agents were staged to guard the 400 or so head of cattle already rounded up. These protesters included some men on horseback, interspersed with women and children. Anyone who did have firearms had them properly holstered or handled appropriately. Outnumbered, these Federal Agents, supposedly BLM employees, who happened to be tac’d to the hilt as if they had just rolled out of the assault on Fallujah, reportedly announced that they were authorized to use gas and lethal force. Threatening to mercilessly suppress the rights of these protesters, they lawlessly raised their rifles and took cover behind vehicles as if to ready for a fire fight. At this point, people on the bridge prepared to defend the protesters in harm’s way.

Fast forward 700 days. These men are arrested, arraigned, and denied pretrial release. More, they languish in solitary confinement. These men are not domestic terrorists. They arrived into a tense, terrifying situation created wholly by the lawless, foolhardy actions of the BLM. They were put in a position where they reasonably acted to defend the lives of themselves and of protesters under the bridge. When the danger passed, they packed up their vehicles and headed home. No one got hurt. They did not incite violence or unrest. They are political prisoners, unjustly held under the shadow of an imminent miscarriage of justice. This is not what any of the founders had in mind when they sought to protect Americans from unreasonable judicial proceedings. Their alleged crimes for that day carry the potential for an effective life sentence. They are charged with conspiracy, intimidation, assault, and extortion, just to name a few. It is not unlawful to travel, with weapons, to carry during a protest, to possess on a bridge; no crimes committed so far. It should not be a crime to reasonably act to defend self and others. If the Government secures convictions, a watershed in precedent will form that makes it easier for dissenters to be charged, convicted and incarcerated.

Finally, they leave behind spouses who may not be able to provide for their children and or dependents while the men await trial. There are two ways to help:

Please Consider helping the families of the unjustly incarcerated: