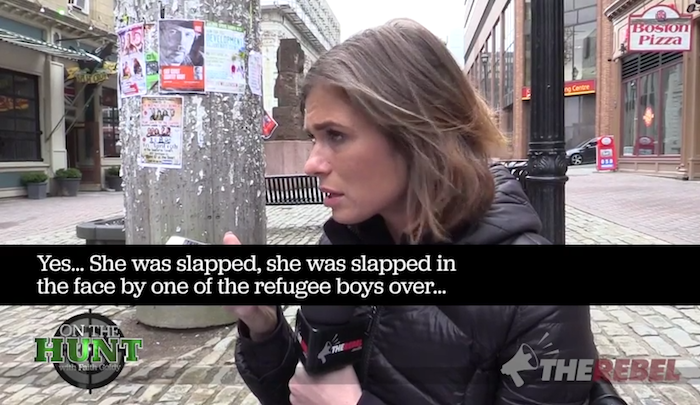 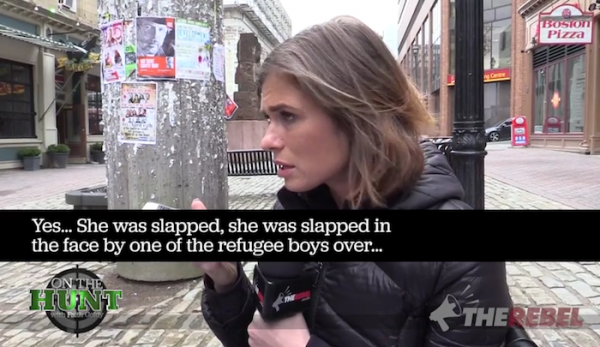 I reported here at Atlas about the bullying by Muslim migrants last week. After that, the Chronicle Herald took its story down, not because it was false but because it supposedly fanned the flames of islamofauxbia. Now the Rebel has a blistering new report showing that it was all true.

Are Canadian children being abused in school by refugee students? We spoke to the parents of children who say they are.

Last week an article by the Chronicle Herald detailed multiple instances of Syrian refugees assaulting Canadian children. The article featured comments by a woman nicknamed “Missy” who explained how her daughter had been choked with a chain and her son had been visibly threatened on the soccer field.

The story was pulled soon after it was posted with members of the left-wing media decrying the story as “racist,” “Islamophobic,” “xenophobic” or simply just not true.

In place of the story, an apologetic message was left in its place saying the story needed more research and was “insensitive” to the refugees.

The Herald also didn’t like how its story found its way onto “right-wing” websites that are critical of mass Muslim migration.

And in a letter on the Halifax regional school board’s website, Superintendent Elwin LeRoux called the complaints by parents in the paper “unsubstantiated accusations” and insisted they were “not true.”

However, the Herald did admit that other parents had come forward with stories of their children being attacked.

In the aftermath of this story and the Herald’s self-censorship, no one in the Media Party bothered to do any research.

The Rebel, however, did.

Multiple parents and even one student spoke to Rebel reporter Faith Goldy who confirmed initial reports in the Herald’s story.

We sat down with Missy, a mother quoted in the original story. She says she feared backlash, and being branded a bigot. Which, she says, is far from the truth because it wasn’t long ago Missy was looking forward to the arrival of her children’s new classmates:

“I did a clothing drive when they first came. I did a basic needs and clothing drive. I’m all for the transition. I just can’t let this keep happening. Something has to be done about it.”

Missy revealed she went to the paper in public plea for more resources for refugees at the school:

“They need help in the school. They need communicators. Interpreters. Teachers. And more than one, Monday to Friday. They can’t have an interpreter up there two days a week. There’s kids that speak Arabic five days a week.”

Missy said that she had run out options at the school after learning her daughter was allegedly choked twice in one week by two different refugee students, but not with a chain as the Herald had reported:

“They said in the paper she was choked with chains two different times. That wasn’t what was said. She was choked twice, but once with a necklace. She was choked with their hands. Like it was just a bunch of little stories that kept adding up and I was like this is enough. Like, once or twice it happens, maybe its just rough play. But it’s happening a lot. And it hasn’t just been this week. There has been numerous things that have happened. Not just with my kids.”

Missy also confirmed her son’s reports of threatening hand gestures from across the soccer field.

“They stopped intramurals in school due to rough play. The kids are being slammed to the ground, choked, and hit. It’s not fair,” she said.

And what about the claim that refugees had shouted “Muslims rule the world” while choking Missy’s daughter? Missy replied:

“The kids said that somebody had yelled, one of the kids had yelled ‘Muslims rule the world’… They said it was one of the Syrian boys. Those kids do know how to speak some English. But they’re very limited to words… all the kids said [refugee boys] have said that more than once.”

When asked about whether or not school authorities were handling the situation, she says the school’s hands are tied:

“We went up on Friday to talk to the principal about the choking with the necklace, she said that her hands are tied. She said that she’s been fighting with her supervisor to get interpreters up there because she couldn’t contact those kids’ parents. And was here Friday. It’s been a whole week that that wasn’t addressed.”

“Yesterday my daughter was slapped in the face again by the exact same boy. Again. We got called up to the school and they had an interpreter in there yesterday and she said, the interpreter said, the little boy just wants to fit in.”

Days after being choked for a second time, Missy’s daughter was allegedly slapped across the face by a refugee student. When Missy reported the incidents to the principal, she ran into another child with a welt on her face after she, too, was smacked. Missy told The Rebel that addressing bullying of any sort is a problem school-wide; but now, there seems to be a double standard at play.

“If our students, our kids did that to these students it’d be a hate crime. It’d be something bad. And now that we’re addressing the problem cause it’s our kids involved, we’re still the bad guy. There’s no win to it. And everyone’s scared to come forward and say something because of what happened with that article.”

Another parent who didn’t want her name used, spoke to us and revealed that her daughter had also been slapped in the face by a Syrian refugee:

“She was slapped in the face by one of the refugee boys in the yard.. had a crush on him, didn’t like it, he slapped her in the face and left a red mark.”

But when the mother’s daughter told the school they simply told her to not approach the refugee students.

“[The school] told her not to go near them, walk away, that’s their solution for everything.”

We reached out to Halifax Regional School Board spokesperson, Doug Hadley, so see if these allegations were being investigated. He said:

“We have to stand up and stop allowing people target a specific group or suggest groups of people behave in a certain way based on who they are and where they’re from. We have to be tolerant of all people and respect their differences. Students have to follow the rules, but we have no indication that any of the allegations in that original article actually happened.”

He then said that no student or parent had come forward, which was a direct contradiction to what the parents we had spoken to told us.

“When we look at the specific allegations … we ask the school what do you know about this… they tell us not only did they not see anyone doing those things, no parent, no student ever came forward to tell an adult that this was a problem or it would have been dealt with immediately.”

“Some of the parents at the centre of this article, the school was speaking to just last week and will continue to speak with them,” Hadey admitted despite the fact he just claimed no student or parent had come forward about the refugee problem.

So, which was it?

We asked one mom if she thought there is a cover up at Chebucto Heights right now. She answered:

“Yes, I do. They gotta look good is what it is. Nobody wants to believe children are being bullied and nobody’s doing anything about it but it’s the truth.”

It’s inconceivable that young children in this country are being bullied by newcomers and nothing is being done about it.

That’s exactly why not a single major media organization sent even one employee to Chebucto Heights to actually talk to the parents there… many of these media organizations, by the way, have offices right there… IN HALIFAX…

Our job as journalists is to tell the story.

But they didn’t believe the story could be true.

So they just didn’t bother to find out.

PS: If you’re angry about this story and want to fight back, VISIT StopTheCoverUp.ca. We’ve made it fast and easy for you to SEND A MESSAGE to the Halifax Regional School Board, telling them to protect all children and stop covering up bullying for politically correct reasons.

PLUS: If your child is being bullied and the teachers, principals, or other school officials refuse to step in because they don’t want to upset the Liberal refugee policy – you can tell us. We’ll check the facts. And if it’s true, we’ll tell your story. Because that’s what journalists are supposed to do — we follow the facts wherever they lead. Just email us at [email protected]