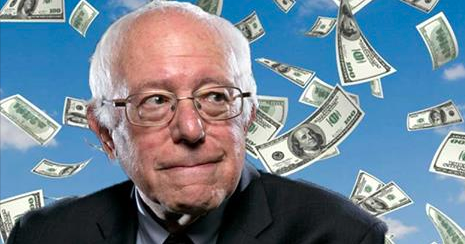 As the November elections loom on the horizon, the presidential candidates have all released their tax proposals on the percentage of your income that they will need to take from you every year to maintain themselves.

While the candidates tout their plans to steal your money, they’ve also revealed how much of their own money goes to the government. The hypocrisy is astonishing.

Following pressure from Clinton, Sanders and his wife, released their full 2014 federal tax return on Friday.

According to his tax plan for everyone else, Sanders establishes four new brackets of 37%, 43%, 48%, and 52%. The top rate applies to taxable income over $10 million. He also raises the rate of all other brackets by 2.2%. If you make $10 million in a year, Bernie Sanders will take $5.2 million — because “free stuff.”

The lowest new bracket proposed by the self-proclaimed socialist is 37 percent. Since Sanders advocates stealing such a significant portion of your income through his new proposals, one would think the Senator would already be paying a similar rate, right? Wrong.

What Sanders’ rate illustrates is the incredible hypocritical ability of politicians. Here is a man, who advocates for taking an enormous portion of your paycheck to fund his programs of “free stuff,” but who doesn’t even contribute as much of his own money to cover these costs.

Sanders is in the top five percent of earners in the country, but his tax rate doesn’t reflect this.

“You’ll get them, yes,” Sanders said in response to Hillary Clinton’s demand for his tax report. “They are very boring tax returns. No big money from speeches, no major investments. Unfortunately – unfortunately – I remain one of the poorer members of the United States Senate.”

Bernie Sanders is correct; he is one of the poorest members of the senate. The median net worth among members of the U.S. Senate in 2014 stood at $2.9 million, according to the Center for Responsive Politics, a non-profit organization that tracks money in politics.

As for Bernie — his public disclosures place his net worth around $300,000 Politico reported. As his “poorness” is a trait to be lauded by his supporters, it speaks to the sheer irresponsible nature of his ability to manage money.

Sanders has made nearly a quarter of a million dollars at his taxpayer-funded job in D.C. every year, for the last two and a half decades, yet he hasn’t managed to save more than $300,000 —  and this is the man who thinks he can ‘balance the budget.’

As Sanders touts his ‘poorness’ while simultaneously calling for more of your paycheck, his deception becomes evident. Bernie is no more a candidate for the people than Hillary Clinton or Donald Trump. As you are told to ‘pay your fair share’ by every one of the presidential candidates, remember that they do everything possible to avoid paying their own.