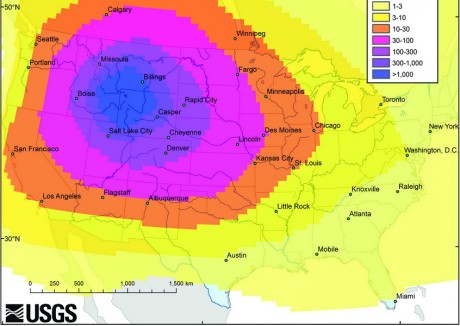 Over the past week, our planet has been hit by large earthquake after large earthquake, and according to Volcano Discovery there are 38 volcanoes around the world that are erupting right now.  We have seen a dramatic spike in global seismic activity that is unlike anything that we have seen in ages, and that is why what is going on at Yellowstone is so incredibly alarming.  Geologists tell us that a full-blown eruption of the Yellowstone supervolcano would have up to 2,000 times the power of the Mount St. Helens volcanic eruption of 1980, and approximately two-thirds of the country would immediately become uninhabitable.  As you will see below, there are signs that something big is getting ready to happen at Yellowstone, and if it does erupt all of our lives will be permanently changed forever.

I want to share with you some footage from Yellowstone that was recorded on Thursday night.  In this video, it appears to be as bright as day even though it is the middle of the night, you can see a whole host of geysers steaming violently, and Old Faithful just keeps going off over and over…

This stunning footage was posted by a YouTube user known as Kat Martin 2016, and the following is what she had to say about the video that you just saw…

There are places s(t)eaming I have never seen steam before….and also note that the bright ground is back. There are no shadows, so it is not from above! As you know the cameras were froze up last night, so we could not see what was going ….or so we thought LOL…I found a way. Somehow (don’t ask me how), the Geyser Observation Study site was able to capture the ENTIRE night with NO freeze ups and cutting in and out….how is THAT? Anyway, I got it and slowed it down so you can see better. Old Faithful had weird seismos last night, and was going off constantly.

But it wasn’t just that one night.  The weird activity at Yellowstone has continued, and you can watch even more recent footage that Kat Martin has posted right here and right here.

So what does this mean?

I don’t know, but watching that footage definitely got my attention.

The Shoshone River, near Yellowstone National Park, suddenly and without warning started boiling, changed color and began to emit a sulfuric odor on March 25. Nearby witnesses wondered if they were “all going to die.” The current consensus among geologists and other experts is that a portion of the Shoshone River began to boil, located near Cody, Wyoming, and a new Yellowstone vent has opened up.

As Mysterious Universe reports, the boiling river near Yellowstone runs just east of Yellowstone National Park. It is close enough to the park and super volcano to be a “canary in a coal mine” as it relates to unusual geothermic events. The event was initially recorded by Dewey Vanderhoff, a photographer who spotted the Shoshone River near Yellowstone boiling and noted other bizarre features in the river.

When a river located above a supervolcano that could wipe out most of the country starts boiling, you would think that would make headline news all over the nation.

It would be exceedingly difficult to overstate the potential danger that Yellowstone poses to the United States.  Other than an extremely large asteroid or meteor, it is hard to imagine any natural disaster that would pose a greater threat.  The following comes from an excellent article by Steve Elwart…

The Yellowstone Caldera, or cauldron, sits on top of North America’s largest volcanic field. Four hundred miles under the Earth’s surface is a magma ‘hotspot’ that reaches up to just 30 miles below ground level before spreading out over an area of 300 miles across three states.

Over all this sits the volcano.

While most scientists believe the probability of a major eruption is very small, there are signs that have some analysts worried, and most agree the volcano holds catastrophic potential.  It could blast 240 cubic miles of ash, rocks and lava into the atmosphere, rendering about two-thirds of the nation immediately uninhabitable, according to some estimates, and plunge the world into a “nuclear winter.”

That certainly does not sound good.

And as I mentioned above, volcanic activity all over the planet is rising.  38 volcanoes are erupting at the moment, and it seems like we hear about another new eruption almost every day now.

But let us hope that Yellowstone does not erupt any time soon.

There are approximately 3,000 earthquakes in the area around Yellowstone every single year, so it is a very seismically active region.  In the event of a full-scale eruption of Yellowstone, virtually the entire northwest United States will be completely destroyed.  Basically everything within a 100 mile radius would be immediately killed, Salt Lake City would literally be toast, and almost everyone and everything in Denver would be dead in short order.

Further away, volcanic ash would rain down continually for weeks.  Those foolish enough to step outside would quickly discover that the ash turns into a substance similar to cement in the lungs, and many would die from suffocation.

The amount of volcanic ash released by Yellowstone would be almost unimaginable.  In fact, it has been estimated that a full-blown eruption would dump a layer of volcanic ash that is at least 10 feet deep up to 1,000 miles away.

Food production in America would be almost totally wiped out, and the “volcanic winter” that would result from a Yellowstone eruption would dramatically cool the planet.  Some have projected that global temperatures would decline by up to 20 degrees.

In the end, the death, famine and destruction that we would experience would be vastly greater than anything that we have ever seen in the history of western civilization.

So yes, there is reason to be concerned that weird stuff is going on at Yellowstone right now.

Let us just hope and pray that we do not see an eruption in 2016 or any time soon.