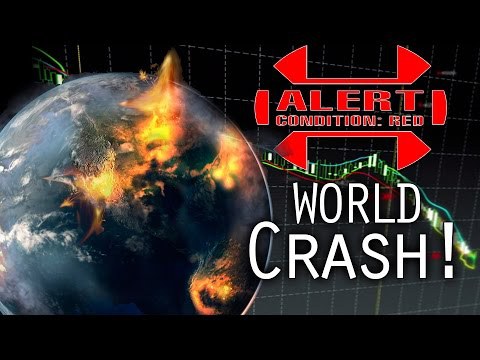 At this point, despite major highs in U.S. stock markets and reassurances from no less than President of the United States himself that the economy is sound, one only need to look around to understand that we are on the cusp of what researcher and collapse strategist Michael Snyder of The Economic Collapse Blog calls the “early chapters of a total meltdown.” In his latest interview with Future Money Trends Snyder notes that the fundamental economic problems we face can be seen across the globe. The United States, Europe, Asia, and South America are all crashing and no one will be immune to what comes next.

We’re in the terminal phase of the greatest debt bubble in all of human history… The crisis that happened last time around… it was just a warning signal of what would happen if we didn’t fix our problems… and of course we didn’t fix them.

It’s not sustainable… There’s going to be a permanent, massive adjustment and a loss of faith in the current system… as it unravels and implodes we’re going to see economic pain on a scale that is historic, like we’ve never seen before… when this thing finally blows it’s going to bring the existing system down.

While most Americans think that near-record breaking stock markets are a sign of recovery and revival in the U.S. economy, Snyder goes on to warn that what we’ve seen in Greece, Cyprus, and Argentina, and what’s happening right now in Venezuela, is a coming reality to Americans.

That could mean everything from bank holidays wherein governments authorize the seizure of account holders’ deposits, to a full-on collapse scenario like Venezuela where food, toilet paper and basic necessities become totally unavailable.

Michael Snyder explains that the one asset class to protect and preserve wealth in the midst of crisis is precious metals and well known billionaire investors have been rapidly acquiring everything they can their hands on in recent months. And as we’ve seen just this year, when panic is the order of the day capital shifts into gold and silver as a crisis hedge.

But that’s not all you can do to prepare for the next wave, says Snyder, and diversifying your approach to collapse-proofing your life will be critical because we simply don’t know exactly how events will play out over coming months and years:

There’re are different strategies that are required to get through a period of crisis, even if it’s just a recession, but especially if it escalates to a full-blown historic financial crisis.

For example. if people have money in financial markets they may want to evaluate what their risk is… because if things start crashing are they going to be able to survive if their investments crash to a 40% or 50% decline… can you weather that? Can you survive that?

A lot of people are moving into gold and silver as a way to insulate themselves, to protect their wealth during a time of crisis.

Of course, not everyone’s in the markets. One thing I really recommend to people is to have an emergency fund in the case you lose your job or there’s a business reversal… you just look back at 2008 and all of a sudden there was a huge downturn and millions of people lost their jobs…

We’re already seeing corporate revenues fall… corporate profits fall… Job cut announcements by major firms in the United States were up 32% in the first quarter of 2016… We’re already starting to see it happen… people are going to lose their jobs.

People go from living a very comfortable lifestyle to being on the street very rapidly.

But an emergency fund may not be enough, because when the global economy detonates it could bring serious monetary and financial problems with it. And that means supply chains for core essentials like food could dry up because of credit freezes like we saw in Greece. Or, your money will be worth so little because of hyperinflation that you simply won’t have enough of it to put food on the table. And that’s why Snyder advocates owning alternative hard assets and supplies:

As it all plays out we believe we’re going to see a total meltdown.

So, for example, if some day you can go to the bank and can’t get money out of the ATM, what are you going to do?

Having your assets spread around in different places makes it harder, if there is an emergency or crisis, for you to be in a situation of hardship because you can’t get access to what you need.

The whole system is built upon lies. And while the powers that be tout stability, what they’ve created is anything but.

And when the house of cards comes tumbling down you can be sure that the elite will be safely tucked away in their bunkers watching it all play out live on their satellite feeds.

They’ve already started preparing for the meltdown by diversifying into precious metals, buckets of food, personal defense armaments and other tangible assets that will be impossible to find during a crisis event.

For more interviews like this visit Future Money Trends. Follow the strategies of top investors like Eric Sprott and Doug Casey – Read this before you buy gold.

Michael Snyder is the founder of The Economic Collapse Blog. He is the author of The Beginning of the End. His latest book The Rapture Verdict has just been released.