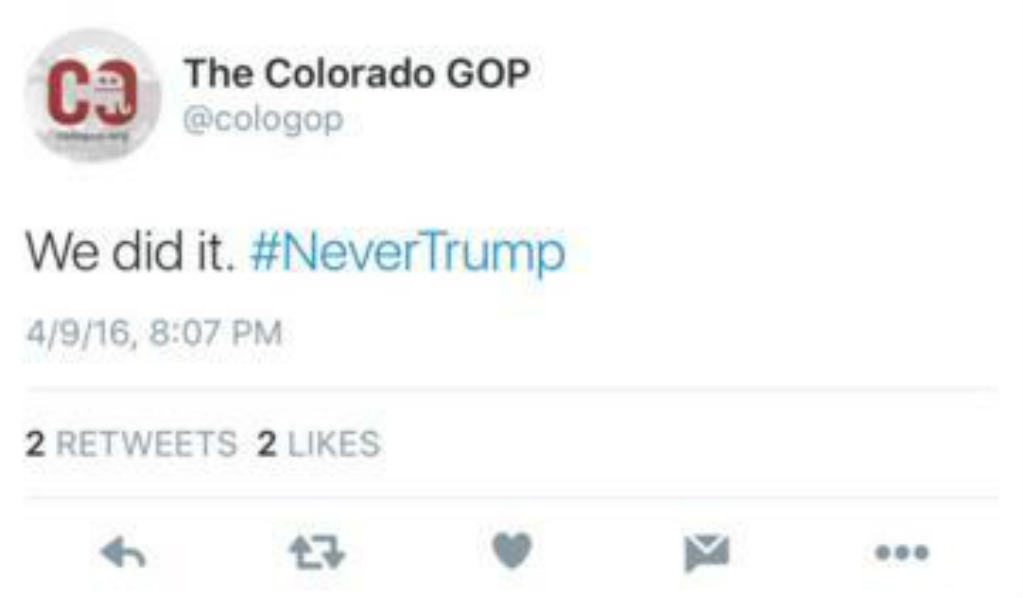 In so doing, the Colorado GOP made its intent clear in a tweet: 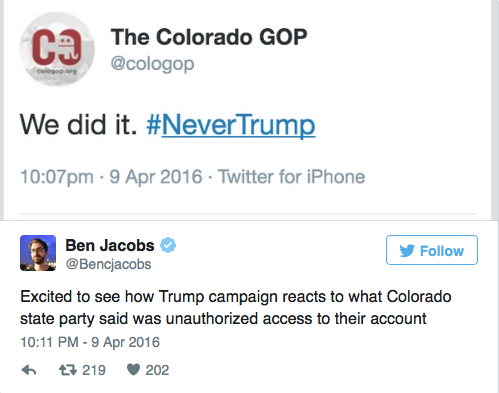 It was last August that the Colorado Republican Party’s executive committee voted to cancel the primary election after the national GOP changed its rules to require a state’s delegates to support the candidate that wins the primary or caucus vote.

At the time, the editors of the Denver Post wondered if Party leaders may have had “other agendas that remain undisclosed” for rejecting a primary election of the people.

Defending the Colorado GOP’s decision to cancel the primary election and give all of the delegates to Cruz, an FOTM reader, who is a Cruz supporter, wrote this comment:

Every state has its own rules. The rules for CO were set last summer. The Trump mania is getting ridiculous. The bottom line is the GOP (and the Democrat Party for that matter) is deciding on who its going to endorse for President.

By “The rules for CO were set last summer,” the reader was implying that the Colorado GOP executive committee wasn’t favoring any presidential candidate when they changed the rule in August 2015 to disenfranchise the state’s citizens by doing away with the primary election.

Well, the reader is wrong.

We now have evidence that Cruz’s supporters in the Colorado GOP are the ones who voted to abolish the primary election, and so deny Colorado Republicans’ right to choose.

In May of 2015, four Colorado Senate Republicans killed an initiative “to create a presidential primary in 2016,” reported the Denver Post. “Under the bill, Colorado would have held a presidential primary in March that ran parallel with the state’s complicated caucus system… when it came before the Senate Appropriations Committee, four Republicans voted to kill the bill with three Democrats supporting it.”

The four betrayers of representative democracy — Republicans who voted against the bill and, therefore, against a primary — are:

Here’s the evidence from Cruz’s campaign website and from social media that all four are Cruz supporters:

(1) On Cruz’s campaign website, Sens. Woods, Grantham, and Lambert are all listed as Cruz supporters and as declared members of Cruz’s “Colorado Leadership team.”

(3) Tweets by the senators show they are Cruz supporters:

Hey, Cruz supporters! You must be so proud of your fellow Cruzies Grantham, Lambert, Woods, and Sonnenberg!

To those residents of Colorado who still identify yourselves as Republican, you are a useful idiot, plain and simple. Grow a backbone and at least change your party identification to non-partisan Independent!