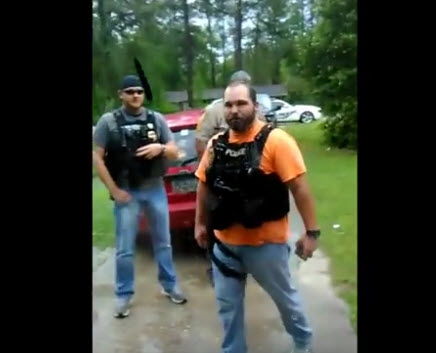 Police protecting or serving, or a gestapo goon squad? You decide.

Welcome to America, where you never know when the gestapo is going to knock on your door and attempt to search you for “crimes” that you didn’t commit, especially if you answer the door armed with a gun you legally own. In fact, it’s a lot like that old saying about if a tree falls in the forest and no one is there to hear it, does it make a sound?

Well, is living in America a crime until a cop shows up?

Looks like someone forgot what the 4th Amendment is. And the 2nd Amendment. Aw heck, let’s just say the whole Bill of Rights.

The video below shows an unidentified Valdosta Police Officer completely lose it in the doorway of Earl Cannady after the officer tries to imply they might be doing drugs because they are “investigating” and his wife’s brother has a history of drug use.

Cannady shuts the door and gets his phone to record the nice little visit.

The officer insists the couple might be involved in drugs because the cop knows the wife’s maiden name and links it to her brother (because every person is immediately guilty for the crimes of their family members, okay check).

The officer then asks “Do you mind if we search your house?” — proof they have no proof because if they did, they would have probably initiated one of those lovely no-knock raids that always get innocent civilians killed.

Cannady responds, “You ain’t searching sh*t, you got a warrant?”

The cop obviously doesn’t, so he goes, “Bet I can go get one.” Gee, really? Then why didn’t you?

Cannady simply goes, “Bye” as in “bye bye tyrannical officer showing up at my door and trying to strip me of my 4th Amendment rights against unreasonable searches and seizures without legitimate probable cause.”

Then it goes from bad to worse:

“Number one, you’re going to quit f*cking cussing at me,” the detective shouts.

“You’re at my house,” Cannady responds.

“I don’t give a f*ck if I’m at your house or not, you ain’t going to talk to me like that, you understand me?”

“I think you’re getting too close,” Cannady warns.

“I don’t give a fuck what you think,” the detective yells, flipping out, to which Cannady says, “I need you to calm down.”

When I demand people stop cussing at me, I always cuss at them even more while I do it, leaving them wondering why it matters if anyone cusses.

The police still claim illegal drug use was happening in the house or a nearby house or… somewhere… but no warrant has been served and no one has been arrested, so again, if a tree falls in the forest…

The Valadosta Police also claim this cop was disciplined for his unprofessional, ridiculous behavior but they didn’t clarify exactly how so, again, if a police department says it disciplined a cop but the department refuses to even release the guy’s name, let alone what type if any discipline happened, did it really happen?

Yep, that’s what being a hero is all about. Make sure and share that with all those first graders who say they want to be “American heroes” when they grow up…