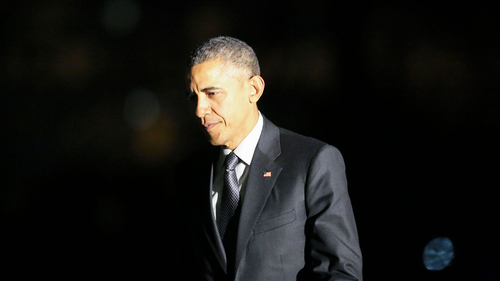 Well, that took long enough! Barack Hussein Obama Soetoro Soebarkah has less than a year left in office and the Republican-led House, which has been led by Republicans since their victory in 2010, is finally getting around to a resolution to establish a Select Committee on High Crimes and Misdemeanors within the Executive Branch and the Obama Administration.

HRes693 IH was introduced into the House of Representatives by Rep. Tom Yoho (R-FL) on Tuesday. The resolution would establish a “permanent Select Committee on Executive Oversight.”

“Every day a new claim and allegation come to light about the abuses of the Obama Administration,” said Yoho. “Blatant Executive overreach, targeting by enforcement agencies, stand down orders of enforcement on existing law—which have resulted in the deaths of Americans, and regulatory agencies that bypass Congress and write their own laws. Enough is enough. While this committee will be tasked with the oversight over future administrations—both Republican and Democrat—the abuses of the current Administration have necessitated the creation of a whole new committee to deal solely with this Administration’s transgressions.”

“We, the Representatives of the people, are tasked with holding the Executive Branch accountable by the guiding document of this nation—the Constitution,” the Florida representative added. “It is our job, our responsibility, and the right thing to do. So, if not now, when? If not us, who? We must prove to the American people we are worthy of the responsibility they have entrusted to us. All it takes for evil or tyranny to prevail or for our Constitutional Republic to fail is for good men and women to do nothing.”

According to the resolution, Rule X of the Rules of the House of Representatives would be amended by adding the following clause:

Permanent Select Committee on Oversight of the Executive Branch

`12.(a) There is hereby established the Permanent Select Committee on Oversight of the Executive Branch (hereinafter referred to as the `Select Committee’).

`(b)(1) The Speaker shall appoint 12 Members to the Select Committee, five of whom shall be appointed after consultation with the minority leader.

`(3) Any vacancy in the Select Committee shall be filled in the same manner as the original appointment.

`(d)(1) Notwithstanding clause 3(m) of rule X, the Select Committee is authorized to study the sources and methods of entities described in clause 11(b)(1)(A) of rule X insofar as such study is related to the matters described in paragraph (c).

`(3) Rule XI applies to the Select Committee except as follows:

`(A) Clause 2(a) of rule XI shall not apply to the Select Committee.

`(D) The chair of the Select Committee may authorize and issue subpoenas pursuant to clause 2(m) of rule XI in the investigation and study conducted pursuant to section 3 of this resolution, including for the purpose of taking depositions, as is deemed necessary in the pursuit of truth and justice for the American people.

`(ii) Depositions taken under the authority prescribed in this subdivision shall be governed by the procedures submitted by the chair of the Committee on Rules for printing in the Congressional Record.

`(F) The chair of the Select Committee may, after consultation with the ranking minority member, recognize–

`(i) Members of the Select Committee to question a witness for periods longer than five minutes as though pursuant to clause 2(j)(2)(B) of rule XI; and

`(ii) staff of the Select Committee to question a witness as though pursuant to clause 2(j)(2)(C) of rule XI.’.

(b) Funding for One Hundred Fourteenth Congress-

(1) PAYMENT OF EXPENSES- There shall be paid out of the applicable accounts of the House of Representatives such sums as may be necessary for the expenses of the Permanent Select Committee on Oversight of the Executive Branch established under clause 12 of rule XI of the Rules of the House of Representatives (as added by subsection (a)) during the One Hundred Fourteenth Congress.

(2) VOUCHERS- Payments under this subsection shall be made on vouchers signed by the chair of the Select Committee and approved in the manner directed by the Committee on House Administration.

(3) REGULATIONS- Amounts made available under this subsection shall be expended in accordance with regulations prescribed by the Committee on House Administration.

So far, Yoho only has one co-sponsor, Rep. Randy K. Weber, Sr. (R-TX). That should tell you all you need to know about the sellout of Republicans in Washington. While I question whether or not the resolution has any chance of passing, the fact that it has taken this long to even see such a document is quite telling. After all, the Republicans don’t care about the Obama administration’s crimes because they have been involved in aiding him in them.