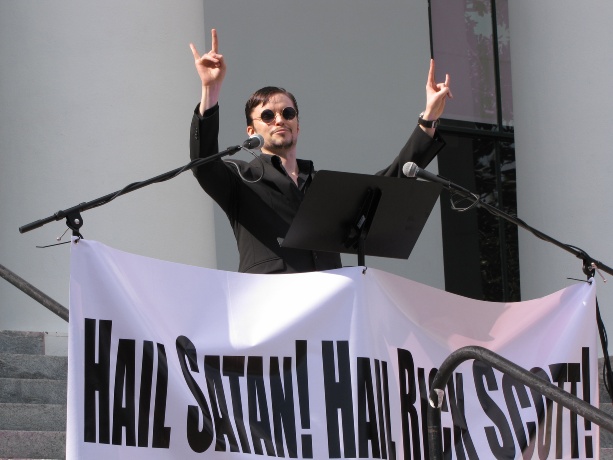 Did you know that when Barack Obama began his presidency with his mother-in-law (Mooch’s mom) inviting a voodoo priestess to perform a Santeria ceremony in the White House? (See “Under Obama, demons have entered the White House“)

It is therefore not surprising that since 2008, self-described Satanists increasingly became active in America — holding Black Mass in public places, making invocations at city council meetings, setting up satanic (Christmas) holiday displays at city halls, and erecting a statue to Satan in Detroit. See:

The organization behind many of the Satanic activities is the New York-based Satanic Temple that first showed up on our political radar in 2013 when, in the name of “religious parity,” the satanists demanded their “right” to erect a 7-foot tall monument to Satan next to the Ten Commandments outside the Oklahoma State Capitol building. (Satanic Temple’s project eventually fell through when a man drove his car into and shattered the Ten Commandments monument.)

In an article for The Conversation, April 19, 2016, Joseph P. Laycock, an assistant professor of Religious Studies at Texas State University, points out that The Satanic Temple (TST) is more than a religion, it is a burgeoning political movement that is bent on and is effecting political change.

Laycock notes that a horror film, “The Witch,” has become “one of the surprise hits of 2016” in part because of an endorsement from The Satanic Temple (TST), which is collaborating with the movie’s A24 studios on a promotional four-city tour called The Sabbat Cycle, in which screenings of the movie are followed by politically driven satanic rituals. The stated goal of The Sabbat Cycle is to inspire a “satanic revolution.”

Promotional poster for “The Witch”

The Sabbat Cycle is part of the Satanic Temple’s PR model since its inception 2013, in which the shocking and the frightening are used to lure media attention to their cause, which the Temple claims is the “separation of church and state.” But the Temple has no objections to non-Christian religions, certainly not to Islam or Judaism, but focuses its attacks on Christianity. That tells us that its cause isn’t really the separation of church and state, but rather the undermining of Christianity and Christian culture — all in the name of the First Amendment and religious pluralism. As Laycock puts it:

Since its founding, TST has waged a highly active campaign to demand greater separation between church and state, and to challenge the privileged relationship Christianity has with government.

TST first made headlines in 2013, when it held a rally in Florida, ostensibly to congratulate Governor Rick Scott for passing a bill, Senate Bill 98, that would allow students to read “inspirational messages of their choosing” at assemblies and sporting events, which the Temple twisted to include satanic messages. And so the rally featured a sign declaring, “Hail Satan! Hail Rick Scott!”

Today, The Satanic Temple has 17 chapters in the United States and Europe and claims an estimated 100,000 members – a figure based on the purchase of membership cards and various forms of online support.

Laycock attended a Sabbat Cycle screening of “The Witch” in Austin, Texas. He writes:

Following the screening, everyone migrated to a bar and music venue called The Sidewinder, where TST held their ritual. Members from the Detroit and San Antonio chapters began setting up and handing out satanic American flags painted in only black and white. I mingled with a small crowd of Satanic sympathizers and the curious. Leather jackets, tattoos and pentagrams were in abundance. […]

During the ritual, a speaker played an excerpt from a speech by Baptist pastor Dr. Jeff Owens, in which Owens warned his congregation, “Satan does not want you to do what he wants you to do. Satan wants you to do what you want to do.” (Other eyewitness accounts of the ritual can be found here and here.) Owens had been warning that Satan uses people’s pride and selfish desires against them, but the ritual imposed its own interpretation onto his message: To TST, Satan represents moral autonomy and personal responsibility.

[Satanic Temple spokeswoman Jex] Blackmore eventually appeared from beneath a hood and took to a podium to deliver what can only be described as a “satanic jeremiad.” She warned that Christian theocrats were taking over America and that those present – atheists, satanists, fans of heavy metal and punk music – were allowing it to happen: “There’s too much apathy and not enough resistance!”

She told the audience, “We do not seek followers, but collaborators.”

Afterward I spoke with some young people from the crowd. One explained that he was attracted to Satanism because “It’s about knowledge,” not dogma. […]

As the event wound down, I was able to interview Blackmore. Like [Karl] Marx, Blackmore saw her revolution as inevitable: the Christian Right would naturally drive people to rebel against it.

She told me that […] TST wants to challenge the popular belief that America is a “Christian nation.” […]

In many ways, TST is the heir to the “New Left” of the 1960s and such figures as Abbie Hoffman and Allen Ginsberg. […] it is […] unclear what effect TST might have on America’s political center of gravity.