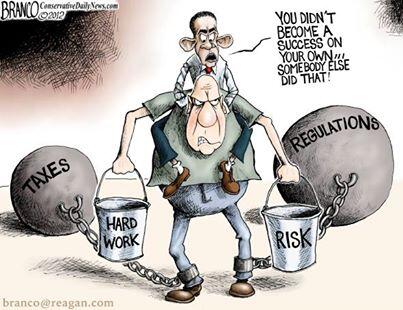 I once had a professor who admitted in front of the class that he was a socialist. Having figured out that there was a deliberate effort to indoctrinate students into the tenants of socialism rather than actually educating them, I thought I would be a little “radical” myself and call him out. I asked him if he knew that the Nazis were socialists and he replied by saying they were a different kind of socialist. I was beginning to understand that I was dealing with the type of left wing ideologue that simply believed that socialism hasn’t been tried the right way yet, which is a typical belief among the so called intellectual elite. Seeing that he thought he was going to influence my position I pressed on. I replied by saying that the Nazis were “national socialists” and seeing as though he was not one of these he must be a “Marxist Socialist.” Oddly enough that observation garnered no reply. I wanted to share this because this professor of mine earned his PHD in social work at Columbia University and most everything that he said was not only to the left of me, but way left of center, period. He was brilliant when it came to teaching the subject of the class, The DSM IV. In fact, there was one topic in particular that I highly admired him for and that was his position on labeling young children with mental disorders. He was adamantly opposed to it. I have to give credit where credit is due. My main point here isn’t what he stood for or what he believed but that he claimed to be a socialist and he was a graduate of Columbia University. Barack Obama is also a graduate of Columbia University, incidentally.

The New York Times once referred to Obama’s education at Columbia as a lost period of his academic history. (Kurtz, Radical in Chief) I think this is significant not so much because of President Obama but because of who is teaching there. Frances Fox Piven

is a leading professor at the Columbia School of Social Work. Remember, President Obama is a Community Organizer which is part of the social work profession. Saul Alinsky

was also a community Organizer and I can assure you that the goals of community organizing are to turn America upside down by fermenting the seeds of hate and discontent. Frances Fox Piven is recognized in the Community Organizing profession as someone who is an authority on the history of organizing during Americas early communist movements. (Kurtz)In fact she and her deceased husband, Richard Cloward

, have published many articles concerning social justice and the way in which American capitalism oppresses minorities. One such article is actually a little startling. Published in Psychology Journal in the mid 1960’s, “The Weight of the Poor: A Strategy to End Poverty”outlines the plan to bring America’s economy to her knees by creating an unsustainable welfare state, which would then force the United States to adapt a communist economy. They suggested the creation of a system in which everyone would qualify for benefits regardless of socio-economic status. In other words, they believed the way to eradicate poverty was a socialist system in which everyone was guaranteed a basic living income. Does this sound familiar? Don’t worry, there’s more.

Frances Fox Piven sat on the Executive Committee of the Democratic Socialists of America. (Kurtz) In 1983 she delivered the opening speech at a conference Barrack Obama attended. This was the Cooper Union Socialist Scholars Conference. It was at this conference where she presented to her fellow socialists the voter registration strategy which we witnessed during the 2008 and 2012 elections of Barack Obama. The following is a quote from Stanley Kurtz’s’ Radical in Chief.

“A voter registration strategy designed to radicalize the Democratic Party and polarize the country along class lines. Piven’s strategy would be carried out in collaboration with ACORN, Project Vote and related organizations over the ensuing decades.” (Kurtz, Radical in Chief)

That is pretty powerful seeing as though that speech was given in 1983. It describes what we are witnessing today perfectly; the country has never been so polarized and it is all too obvious the elections were fixed for Obama. Everybody has come to suspect that this is all orchestrated but when you look into the profession of community organizing it all comes together. Remember all the news about Acorn at the beginning of Obama’s first term as president? Do you remember Occupy Wall Street? It seems that Frances Fox Piven not only played a role in encouraging this kind of manufactured crisis as she gave a few speeches at occupy crowds, but she also had extensive ties to ACORN. (ACORN stands for Association of Community Organizations for Reform Now.)It could be theorized that Occupy Wall Street was a larger part of a plan that was originally presented back at the Socialist Scholars Conference in 1983, which our President attended. The whole purpose of Piven’s article was to organize and radicalize the poor in order to demand an end to poverty.

The only problem that no one seems willing to discuss is the fact that the United States has spent over one billion dollars on the war on poverty since the 1960’s, and the number of people living in impoverished conditions has remained virtually unchanged. Perhaps its due time people realize that it isn’t capitalism keeping people down; it’s the idea that people are owed a living without working for it. Piven’s idea of guaranteed welfare for everyone would do nothing but destroy initiative. Where would the government get the money to pay everyone if the whole nation had lost the will to work and came to expect a monthly check for nothing? Everyone seems to forget that government gets it money from working Americans in the form of income taxes. Here in lies the sickness of the communist mentality; Piven knows this. She knows that giving everyone free benefits would crash the economy and force the United States to adapt communism; after all, this is the summation of her plan. Why would the left, who claims to want to empower the poor, deliberately create a system where everyone would have lost the initiative, is equally poor and has no opportunity to better their lot in life? This is the reality of communism that everyone is ignoring. The answer to that question is simple really. Power, absolute power over society is the driving motivation and any means that bring them to this end are, in their minds, completely justified, even if it destroys the livelihood of millions of people.