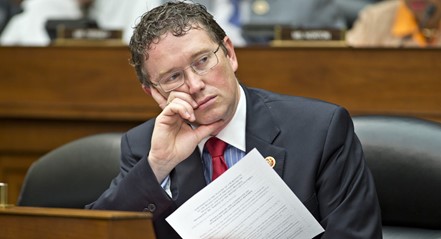 Last week Rep. Thomas Massie (R-KY) demanded on the House floor a roll-call vote on a billion-dollar foreign aid bill. Only due to this action are people able to see how House members voted on the legislation. Otherwise, the bill would have been passed by a voice vote of around twelve representatives who happened to be on the floor.
Interviewed by host Brian Thomas at KRC-Radio in Cincinnati, Ohio the morning after the vote on what Massie calls in the interview “a one billion dollars slush fund for the president,” Massie reveals that that same day four bills he had not been given an opportunity to read were passed by voice vote. This is among the issues Massie addresses in the interview that cause him to conclude that members of the House are moving legislation in a way that would lead to Massie’s county-level politicians being jailed if they acted similarly.

Initially, Massie says that the regular passage of legislation by a dozen or less representatives violates the procedure required in the US Constitution. Massie explains:

Regardless of what the rules and practices of the House are, the Constitution says the House has to have a quorum to do business — in other words to pass bills. A quorum is defined in the Constitution as a majority. There are 435 members of Congress, so a majority of 218 members must be present to do this. Yet, they commonly do it with less than a dozen members on the floor.

Massie continues that this has been going on for decades except that, in the past, it was “typically used for Post Office naming” or “technical corrections to a bill” while now billion and multi-billion dollar spending bills are passed on the House floor with just a dozen or so representatives present. A reason House members are willing to allow this to occur, Massie suggests, is “because they don’t want to be held accountable.”

Massie explains that having “one to two days working notice” that the billion-dollar foreign aid bill was coming to the House floor for consideration gave him time to plan for being on the floor to demand a vote. But that is not always the case. Massie provides an example from the same day’s House proceedings:

I will say this, we had about one or two working days notice that this bill was coming to the floor. So I had plenty of time to get over there or plan to get over there. What’s really frustrating is when they put bills on the floor and they don’t eve give us the text to the bill, they don’t tell us in advance that it is coming to the floor. In fact, last night I was standing on the floor and they passed four bills, that were unannounced, by unanimous consent. Now, three of them were permission to use the grounds of the Capitol for some celebration or something. But, one of them was a drug bill and they passed that thing by unanimous consent as we were all filtering out of the chamber and thought the votes were over.

An eye-opening revelation of the Massie interview occurs when he discusses how the process used to pass legislation in the House would not satisfy the legal requirements imposed on Massie’s county-level politicians in Kentucky. If these county politicians tried to pull the kinds of shenanigans that regularly occur in the House, Massie says they would be jailed. Massie explains that he “saw four bills passed last night” for which he could not even obtain the text. Massie then explains the consequences if such a process were carried out by his county politicians. Massie states:

Massie has some experience with fiscal court as a basis for making this comparison. Before being elected to the House, Massie was the judge-executive of Lewis County, Kentucky — the head of the county executive branch who is also a member of the fiscal court.