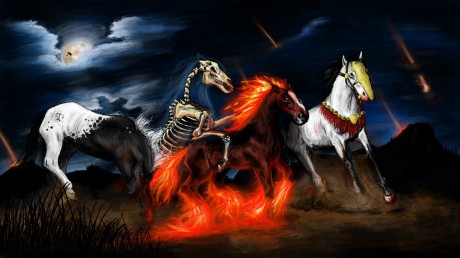 All over the world seismic activity is increasing.  In recent weeks we have seen a dramatic earthquake in Ecuador, more than 600 earthquakes have experts extremely alarmed about what is happening to Japan’s southern Island, and 37 volcanoes around the planet are erupting right now.  Most of the large earthquakes and volcanic eruptions that we have witnessed lately have come along the Ring of Fire, which is an area of seismic instability which roughly encircles the Pacific Ocean.  Fortunately the west coast of the United States has been spared so far, but scientists tell us that tension has been building up along the San Andreas fault and the Cascadia Subduction Zone for decades, and they assure us that it is only a matter of time before we see a major event.  What that day arrives, will you be prepared?

There were a couple of notable seismic events which took place on Monday.  First of all, the largest volcano in Russia’s Far East known as Klyuchevskaya Sopka violently erupted.  Steaming hot ash was shot more than three miles up into the air, but fortunately it is not a heavily populated area.  This represents yet another major volcanic eruption along the Ring of Fire, and this has some scientists extremely concerned about what may be coming next.

Here in the United States, an unusual swarm of 21 earthquakes along the Arizona-Nevada border is also raising eyebrows…

More small earthquakes shook northwest Arizona Sunday adding to the list of temblors that have struck the area since March 29.

There has been a swarm of 21 quakes in an area along the Arizona-Nevada line south-southwest of Littlefield, AZ, which is also close to southwestern Utah and the frequency and span puzzles geologists.

The good news is that we have not had a truly historic earthquake in the U.S. for decades, and there have been no major volcanic eruptions since Mount St. Helens exploded back in 1980.

But scientists assure us that we are living on borrowed time, and there are three extremely dangerous volcanoes in North America that I am keeping a close watch on right now…

Popocatepetl is an Aztec word that can be translated as “smoking mountain”, and more than 25 million people live within range of this extraordinarily dangerous mountain.  Experts tell us that during the time of the Aztecs, entire cities were completely buried in super-heated mud from this volcano.  In fact, the super-heated mud was so deep that it buried entire pyramids.  In the event of a full-blown eruption, Mexico City’s 18 million residents probably wouldn’t be buried in super-heated mud, but it would still be absolutely devastating for Mexico’s largest city.

Mt. Rainier has been dubbed a “time bomb“, “the most dangerous mountain in the United States” and “one of the most dangerous volcanoes in the world” because it sits so close to Seattle, Tacoma and other major cities along the coast of Washington state.  In the event of a full-blown eruption, countless numbers of people would literally be buried alive in a tsunami of super-heated mud.  These tsunamis of super-heated mud are known as “lahars”, and scientists believe that Mt. Rainier is capable of producing lahars that could move at speeds of up to 50 miles per hour.  I am so convinced that an eruption of Mt. Rainier is in our future that I even put onein my novel.

Many of us that are a bit older still remember the eruption of Mount St. Helens back in 1980.  Well, scientists tell us that a full-blown eruption of the Yellowstone supervolcano would have up to 2,000 times the power of that eruption.  Salt Lake City would be toast, anything caught outside in Denver would probably be dead in pretty short order, and a layer of volcanic ash at least 10 feet deep would be dumped on everything even up to 1,000 miles away.  Food production in America would be virtually wiped out, and a “volcanic winter” would cool global temperatures by up to 20 degrees for an extended period of time.

In other words, life as we know it would come to an end.

That is why the extremely unusual activity going on at Yellowstone right now is such a concern.  If it decides to blow, world history will make a dramatic turn in a single moment.

As always, we should never give in to fear.  There are definitely going to be major earthquakes and historic volcanic eruptions in North America, and we are going to have to deal with them.  Doing some common sense things in advance will give you and your family the best chance of calmly and smoothly making it through such a crisis.

Below, I have shared some tips that come directly from the CDC.  This first set of tips suggests things that you and your family can do to get prepared for a major earthquake…

Stock up now on emergency supplies that can be used after an earthquake. These supplies should include a first aid kit, survival kits for the home, automobile, and workplace, and emergency water and food. Store enough supplies to last at least 3 days.

If an earthquake occurs, you may need to evacuate a damaged area afterward. By planning and practicing for evacuation, you will be better prepared to respond appropriately and efficiently to signs of danger or to directions by civil authorities.

Take time before an earthquake strikes to write an emergency priority list, including:

Make a list of important information and put it in a secure location. Include on your list:

Gather and Store Important Documents in a Fire-Proof Safe

Preparing for a volcanic eruption requires a strategy that is a little bit different.  Here are more tips from the CDC…

If you are told to evacuate

Follow authorities’ instructions if they tell you to leave the area. Though it may seem safe to stay at home and wait out an eruption, doing so could be very dangerous. Volcanoes spew hot, dangerous gases, ash, lava, and rock that are powerfully destructive.

If you are told to take shelter where you are

In the end, you have got to do what you feel is best for you and your family.

Personally, I would be extremely hesitant to live in very high risk areas along the west coast or near the Yellowstone supervolcano.  This is especially true considering how dramatically global seismic activity is increasing.

But others point to the fact that these “danger areas” have not seen any major events in decades, so they wonder what all of the fuss is about.

So what do you think?  Please feel free to join the discussion by posting a comment below…