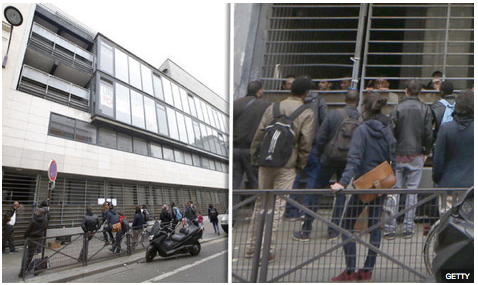 “Gang of migrants demanding ‘respect’ smash way into Paris school and refuse to leave,” By Laura Mowat, The Express, April 25, 2016 (thanks to Christian):

MIGRANTS have been called a “disgrace” as they illegally squat in a school in Paris.

The 150 migrants have taken over the building of Jean-Jaures school since Friday as they seek shelter, electricity, gas and water. Authorities have labelled the takeover of the school in Paris’s 19th quarter a “savage occupation”. The chief constable of the area, Jean-François Carenco, has said: “In this country, it is the law that speaks and not force.“They are attacking a building that is not empty but is having work done to it.
take our poll - story continues below
Completing this poll grants you access to DC Clothesline updates free of charge. You may opt out at anytime. You also agree to this site's Privacy Policy and Terms of Use.

Around 1,000 migrants were evacuated from a makeshift camp by a Paris metro station

“It is a disgrace. France is a country of refuge, but not a chaotic country.”Authorities have asked migrants to leave the school, which needs to welcome students after it has been renovated.Neighbours and the local authority are concerned that the illegal occupation could lead to a possible deterioration of the area and lead to social issues.

But an un-named migrant who spoke to FRANCE 24 said: “You have seen the conditions that we live, it isn’t humane.“We ask to be given a bit of consideration and respect, that is why we have decided to come to the school.”