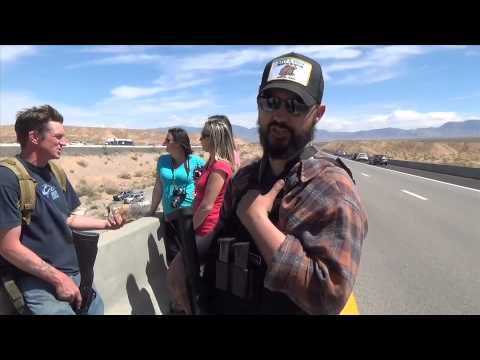 Behind the scenes, and out of the eyesight of public and mainstream media brews a potentially watershed constitutional crisis. On Saturday 12 April, 2014 three men traveled from Central Idaho to Bunkerville, Nevada because of the lawless, heavy-handed suppression of natural, Constitutionally-protected rights that they had witnessed in the days prior. Agents of the Bureau of Land Management (BLM) had tazed, assaulted, and used bite dogs on protesters. The BLM established cordoned off areas known as “First Amendment Zones,” where people could lawfully exercise their First Amendment Rights. Recognizing the egregious overstep of Federal Agencies as it relates to these immutable rights; Eric Parker, Scott Drexler, and Steven Stewart traveled through the night to Nevada with the intent to resist the Government’s abjectly unlawful suppression of rights. On an overpass, able to observe a group of men, women, and minor children protestors who were preparing to walk toward a gate where agents had corralled 400 or so of Cliven Bundy’s cattle, they witnessed heavily armed agents announce that they were authorized to use lethal force if the crowd moved any closer… to protect cattle. Believing that these agents were about to unlawfully deprive these protesters of life and liberty with lethal force, they established a defensive posture from which, if necessary, they could defend the people below who were guilty of nothing more than exercising their right to free speech.

Fast-forward two years. Nearly 700 days after what has colloquially become known as the Bundy Ranch standoff, these men were arrested, detained, and charged with a litany of crimes that carry a maximum sentence of over 100 years if served consecutively. Despite being, functional, productive members of society with no relevant, substantial criminal history; maintaining gainful employment while raising families, they have been denied pretrial release. They were held in solitary confinement for nearly 60 days. Their right to a speedy trial is being suppressed by the US Attorneys who are asking the courts to consider the case “complex” and asking that they all be tried in a large, single trial… sometime in 2017. In the meantime, their families are left with the burden of survival with primary breadwinners sitting in Federal Prison.

The nature of the Constitutional Crisis is as follows. These men have been charged with crimes ranging from conspiracy to assault; and it all hinges on the embellished assertion that they responded to a call-to-arms from Cliven Bundy. The Government has characterized their involvement as a crime of violence as part of a larger conspiracy to impede federal officer’s execution of a lawful court order. These assertions are laughably false; nevertheless, the US Attorneys are going to press forward to obtain a conviction. This could set an exceptionally dangerous precedent. Convicting these men… who never fired a shot, who didn’t hurt anyone, who didn’t incite violence, who acted defensively… could set a precedent to widen the potential overreach and rubber stamp unlawful actions on the part of Federal agencies. Convictions could make it easier for the government to associate anyone who stands up to tyranny with a similar avalanche of litigation. Conspiracy statutes are the friend of the government. They can be applied broadly and to absurd extents. In this case, men who traveled to protest lawless actions on the part of Federal agencies are now accused of participating in a conspiracy with the Bundy Family. Why? Because they showed up and acted defensively when they believed that innocent protesters could be subjected to lethal force. If they obtain convictions, the only question left to be asked is, “Who’s next?” Make no mistake, this will embolden the Government to come after others for less than what these men are charged.

These men are political prisoners of a Federal government that feeds on a glut of its own Constitutionally invalid power. As this article is being read, legal maneuvers are being exacted that will make it easier for the US Attorneys to obtain convictions against these men. Eric Parker speaks of the crisis from prison here:

The question now before every liberty-loving patriot American is what can each do to help? The fight has gone from rangeland to the courtroom. These men need help to fight these charges and to support their families while they are away. Judgments in favor of an already out-of-control Government will only cement their stranglehold on individual liberty. There should have been thousands (tens of thousands) of people in Bunkerville that day. An overwhelming flood of voices proclaiming that tyranny will not stand; instead, only a few dropped what they were doing. They are bearing a burden of sacrifice that should not be spread among so few people; a burden that would not have fallen so heavily on so few if more had been more vocal.

Please Consider helping the families of the unjustly incarcerated: