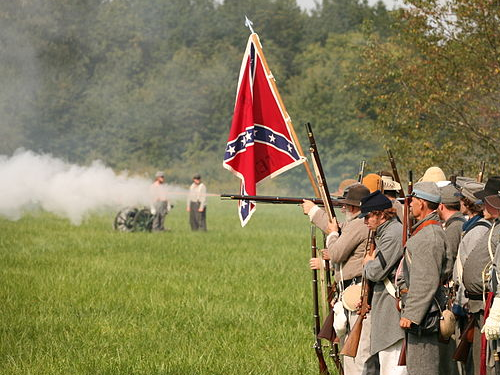 Round Rock, TX — Seven middle school students have been suspended for two days for taking a picture of themselves with a Confederate flag.

According to The Austin Statesman, a parent of one of the 14-year-olds who was suspended might sue the Round Rock school district over it:

Andrew Birdwell said staff at Ridgeview Middle School had no right to give a two-day suspension to his son, and that he and his son deserve an apology.

“Any and all teachers would find out, hopefully … the school made a mistake and know my son isn’t a racist,” Birdwell said.

The school district released a statement Wednesday stating there were a series of incidents at school involving a group of students posing with a Confederate flag and speaking “hateful language.” The district would not comment any further to ensure the privacy of students, the statement reads.

“Please know that Ridgeview and Round Rock ISD value student voice; however, the top priority for all schools, including Ridgeview, is to provide every student with a safe and secure learning environment. Safety and security is contingent upon a culture of tolerance, as well as student voice,” the statement reads.

The assistant principal found the picture after going through his son’s phone, because modern American public schools are like prisons where students have no right to privacy whatsoever.

“When I asked my son, ‘Exactly why would you take a picture?’ he said, ‘Dad, I just really liked the colors,’” Mr. Birdwell told Fox 7. “I called up there yesterday asking for a copy of the disciplinary action and [the principal’s] statement was to me that the boys were holding up a Confederate flag and that is a sign of slavery.”

“It was kind of tough for me to explain why he’s getting assignments from school with a Confederate flag on it, yet he can’t hold one,” Birdwell said.

Birdwell, who thinks his son was motivated to take the picture because the students are currently learning whatever version of Civil War history that school decides to teach its students, was told by school officials that his son did not say any “hateful language,” so the suspension was due solely to taking the picture.

History is being warped and sanitized in our public schools to fit a politically correct agenda, cursing our nation’s students to be dumbed down from being able to actually draw anything from its lessons.

What do you think these kids will learn from this event?

“There was nothing more to the picture,” Birdwell told the Statesman. “They weren’t smiling, didn’t look sad, didn’t look happy; just taking a picture.”

Two days suspension… for taking a selfie with a flag.