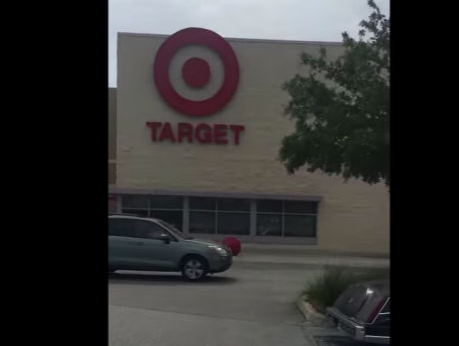 When a man decided to hide a camera in his shirt pocket and go to Target to test out the store’s new bathroom policy, he got affirmation of a lot more than just the fact that this has nothing to do with transgendered people “feeling comfortable” using the bathroom of their choice.

When he, a man dressed as a man, asked a Target security guard if he could use the women’s restroom, the guard almost enthusiastically answered, “Yep!”

So there you go. Target is straight up allowing men — that’s right, men, not transgendered men who live their lives as women, but MEN — to use the women’s bathroom ‘if it makes them feel more comfortable’.

Has anyone asked Target if they care whether or not the little girls in there feel more comfortable with a strange man in the bathroom?

As of writing this, the American Family Association boycott Target pledge has now garnered over a million signatures (and counting), mostly because of exactly what is described above.

It isn’t that people are upset about transgendered people using “their” bathroom… people are concerned that sexual predators and perverts will be able to seek out potential victims much more easily this way. And as previously reported, this exact scenario has happened a lot more often than the people behind this agenda would have everyone believe.

If the video above is any indication, there is nothing (including Target security) to stop them.