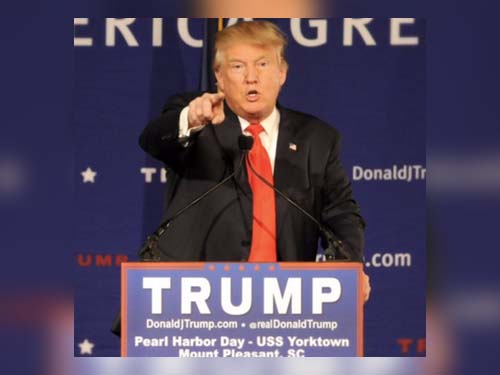 Donald Trump has been named in a timely $100 million lawsuit that claims he performed sex acts on a minor when she was held as a sex slave by convicted billionaire pedophile Jeffrey Epstein back in the mid-90s.

A woman named Katie Johnson, who asserts she was subjected to “extreme sexual and physical abuse” from the age of 13, has filed a lawsuit claiming she was a teen sex slave of Jeffrey Epstein’s and forced to perform sex acts on Donald Trump back in the summer of 1994.

In her claim, Johnson “alleges she was enticed by promises of money and modelling career to attend a series of underage sex parties held at the New York City residence of defendant Jeffrey E Epstein and attended by Donald J Trump.”

She claims she was forced to perform a sex act on Trump, 69, and “engage in an unnatural lesbian sex act with her fellow minor and sex slave”.

She said on the “fourth and final sexual encounter” Trump “proceeded to forcibly rape the Plaintiff.”

Johnson alleges in her claim she “loudly pleaded with defendant Trump to ‘please wear a condom’.”

Trump categorically denies the charges as “not only categorically false, but disgusting at the highest level and clearly framed to solicit media attention or, perhaps, are simply politically motivated.”

Breitbart is reporting that the lawsuit was obviously filed by someone with a legal background, but that the address listed for the plaintiff is for a foreclosed empty property in California and there’s actually no shred of proof that Katie Johnson even exists.

Attorney Alan Garten says the woman claimed her net worth was $278 in order to request a filing fee waiver to avoid having the suit traced back to her. “This has all the hallmarks of being drafted by someone with some level of legal background,” he said, adding, “this was filed to not leave fingerprints. It seems like there’s a lot more to this story than some random person. Clearly there’s some kind of collusion going on here.”

But you know who has been hanging with Epstein? Bill Clinton, who flew down to Epstein’s private Caribbean island on multiple occasions between 2002 and 2005.