Moscow, Russia – During Russian President Vladimir Putin’s annual call-in show on April 16, which received more than 3 million calls and lasted almost four hours, Putin clearly articulated what underpins the continuing animosity in the U.S.-Russia relationship when he was asked:

“Who would be better for Russia, Donald Trump or Hillary Clinton (as US president)?”

Putin made clear that the contentious relationship was not the result of individual politicians, but rather stemmed from a belief that America was “exceptional” among the concert of nations. The Russian leader noted that U.S. should “act respectfully toward all its partners, including Russia” and set aside its “imperial ambitions.”

These “imperial ambitions” have been consistently on display as NATO prepares to deploy four battalions – close to 4,000 soldiers – to the Western border of Russia. The U.S. claims the military escalation is in response to Russian military exercises near the Baltic states of Latvia, Lithuania, and Estonia – famously parroted in the Western media as “Russian aggression.”

What the military and media fail to mention is that these “aggressive actions” the Russians are claimed to be undertaking are simply Russia conducting drills on its own soil. All one need do is analyze the Orwellian speak from U.S. Deputy Secretary of Defense Robert Works to fully understand the insanity of U.S. policy towards Russia.

The Russians have been doing a lot of snap exercises right up against the borders, with a lot of troops. From our perspective, we could argue this is extraordinarily provocative behavior.

What is not made clear in the article but should not be lost on readers is that “right up against the borders” is still Russian territory. But “right up against the borders” on the other side — where the US military is to be deployed and to conduct exercises — is most definitely not US territory. In other words, the US is traveling thousands of miles to place its troops on Russia’s border in response to Russian troops inside its border.

The media parroting of “Russian aggression” is dangerous, as it conditions the public to incite fear and hate towards a state and people that pose very little risk to the United States.

Retired U.S. Air Force Lt. Colonel Karen Kwiatkowski recently offered pertinent insight in an interview with RT about why Russia continues to be so vilified by the Pentagon and American media alike:

“The Pentagon needs and wants Russia to be the next big enemy that they are arming against it, budgeting against it, that they are targeting. Certainly, we have talked for a long time about China and China plays an important role as the enemy of choice for the U.S. military. But Russia is ideal in part, because we don’t import a lot of things from Russia, in part because we don’t have the debt relationship with Russia that we do with China. So, Russia makes for a very convenient enemy for the Pentagon in terms of its mission, its budgeting, and its intelligence organization…

“The Pentagon needs that kind of enemy,” Kwiatkowski continued. “And [U.S. Secretary of Defense] Ashton Carter, if you listen to what he says continually — even from the beginning of time he was put in office — his job is fundraising, just like the university president’s job is not education but rather fundraising. Ashton Carter’s job is also fundraising, and he fundraises through this process of identifying, pushing, and delivering up an enemy that will justify their budgets.”

Though Russia could never be mistaken for an international saint, the U.S. military and White House’s Cold War 2.0 propaganda of an increasingly “aggressive Russia” is simply cannon fodder for the military industrial complex to maintain its hegemonic grip on the levers of power within the United States.

The continual eastward expansion of NATO allows the alliance to deploy forces next to Russia’s borders and then accuse Moscow of “carrying out dangerous maneuvers” near the alliance’s bases, according to Russian Foreign Minister Sergey Lavrov.

“This is a mean-spirited attempt to turn the issue on its ears,” Lavrov told Sweden’s Dagens Nyheter daily.

“NATO military infrastructure is inching closer and closer to Russia’s borders. But when Russia takes action to ensure its security, we are told that Russia is engaging in dangerous maneuvers near NATO borders. In fact, NATO borders are getting closer to Russia, not the opposite,” the Russian FM pointed out.

It is virtual insanity for the U.S. to posture and provoke Russia in a manner that will ultimately force the Russians into a defensive military conflict. The Russians will protect their sovereign soil, just as the United States would do with a foreign force amassing on its borders.

To attempt to force the military hand of a state that has virtual nuclear parity with the U.S., as well as the second largest military in the world is nothing less than a suicide mission of global proportions. 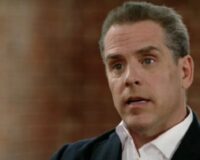 Hunter Biden Claimed Lunden Roberts Was a Basketball 'Mentor' to His Daughter and Sasha Obama
June 15th, 2021 Flag And Cross