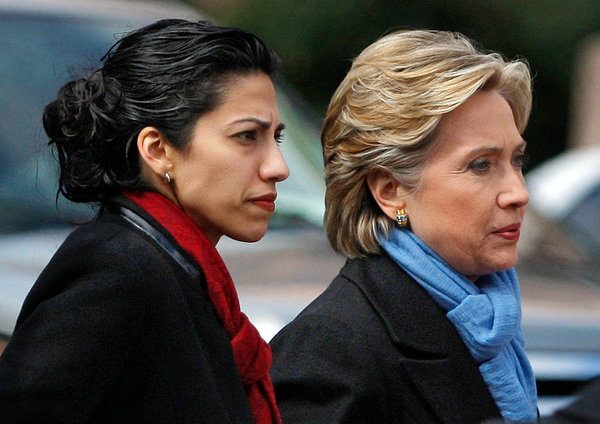 We know from the words coming out of the Department of Justice that the probe into Hillary Clinton‘s illegal private email server is not a scandal, but is, in fact, “a law enforcement matter.” Now, the Federal Bureau of Investigation is conducting more interviews of Clinton’s aides, including her closest aide, Muslim Brotherhood-tied Huma Abedin.

Some of Hillary Clinton’s closest aides, including her longtime adviser Huma Abedin, have provided interviews to federal investigators, as the FBI probe into the security of her private email server nears completion, U.S. officials briefed on the investigation tell CNN. The investigation is still ongoing, but so far investigators haven’t found evidence to prove that Clinton willfully violated the law the U.S. officials say.

The probe remains focused on the security of the server and the handling of classified information and hasn’t expanded to other matters, the officials said. Spokesmen for the FBI and Justice Department declined to comment. The Clinton campaign has not yet responded to CNN’s request for comment. David Kendall, an attorney for Clinton, had no comment.

“These FBI interviews are another reminder of the gross negligence Hillary Clinton displayed as Secretary of State when she set up an off the books email server that exposed classified information on thousands of occasions,” said Republican National Chairman Reince Priebus in a statement. “This reckless attempt to skirt government transparency laws put our national security at risk, and underscores just how big of a risk a Hillary Clinton presidency truly is.”

Clinton will also be interviewed by the FBI as a final step in the investigation, but we know she has already engaged in clear lying about Benghazi, as well as a host of other lies regarding the current illegal email server.

“From the start, Hillary Clinton has offered to answer any questions that would help the Justice Department complete its review, and we hope and expect that anyone else who is asked would do the same,” Brian Fallon, a spokesman for the Clinton campaign, said in an email to the LA Times. “We are confident the review will conclude that nothing inappropriate took place.”

The question now is, if and when will the DOJ act on the evidence which appears conclusive that Clinton compromised national security with regards to failing to secure her email server?

“Most legal experts, including a number of former federal prosecutors, believe that Clinton faces little risk of being prosecuted for using the private email system to conduct official business when she served as secretary of State,” claims the LA Times.

Clinton seems pretty confident that she will not be prosecuted. When Matt Lauer asked Clinton about people’s desire to see her in handcuffs, she laughed like she did for getting child rapists off the hook, and said, “Oh my goodness! That is not going to happen. There is not even the remotest chance that is going to happen.”